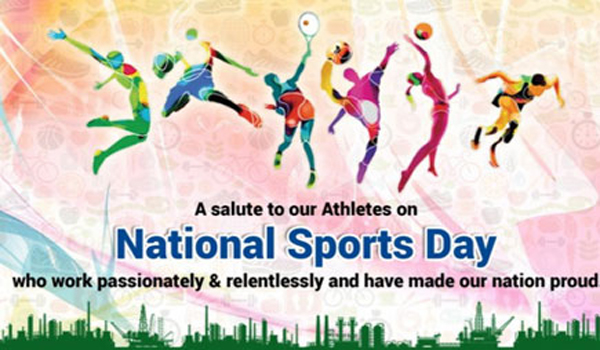 India celebrates its National Sports Day every year on the 29th of August. The day is celebrated to honor the legendary hockey player, Major Dhyan Chand Singh. 29th August happens to be the birth anniversary of Dhyan Chand, who made India proud by his extraordinary sporting skills. He was the greatest hockey player India has ever seen.

ABOUT THE EVENT SPORTS DAY

Dhyan Chand had joined the army at an early age and learned the game of hockey from his coach Pankaj Gupta and soon became an expert in ball dribbling and goal scoring. He quickly became the Indian Hockey Team captain due to his excellent playing techniques and was given the nickname 'Chand' which means 'Moon'. During his sports career, Dhyan Chand had won three Olympic medals and till date remains the only hockey player who has received the Padma Bhushan award. He had won the Olympic Gold medal six times in a row for India in hockey. His lifetime awards and achievements in sports are considered as the highest point in the history of Indian sports day.

The National Sports Day is dedicated to the brilliant hockey player Dhyan Chand. This day is celebrated by organizing friendly matches between different Indian hockey teams at the Dhyan Chand National Stadium in New Delhi which was constructed in the respect and honor of Major Dhyan Chand.

On this day, sports persons commemorate this day in a sporty way. The President of India Bestows prestigious awards such as the Arjuna and Dronacharya Award, Dhyan Chand Award, etc. to the sportspersons who have contributed to the growth of sports all through their sports career and also after retirement. A lot of schools throughout the country celebrate this day as their Annual Sports Day and young people are also encouraged and made aware of the possibilities in sports and what all advancement the country has obtained in sports.

On this holiday, the President of India will often give out sports awards. Some of these awards include the Dronacharya Award, Rajiv Gandhi Khel Ratna, and the Arjuna Award. Some people will gather around one of the Dhyan Chand statues that are across India and place flowers on them. However, some of the most intense celebrations occur every four years during the Summer Olympics. This is when friends and families not only gather together to remember the greatest field hockey player of all time but also to root on their favorite athletes.

Different countries celebrate their National Sports Day on dates as per their own history and dates, declared by their sports committee. The National Sports Day in India (also called Rashtriya Khel Divas) is celebrated on 29thAugust every year with a lot of enthusiasm and sportsmanship. People from all the age groups take part in sports like; marathon, kabaddi, basketball, hockey, etc.

Everyone takes part in various types of sports and games. The day not only works as entertainment for people but also spreads awareness about what role sports play in an individuals life. On this day, various talent hunts are conducted taking out the best out of the young generation. It is also relevant to say that physical activities are treated by many countries as cultural activities; hence it also becomes clear that the concept of games and sports can never be out of fad.

The celebration of National Sports Day will be observed all over India on 29th of August, 2019, Thursday.

HOW IS NATIONAL SPORTS DAY CELEBRATED?

Most schools arrange annual Sports event on this day every year. The participating students portray their capability through various mediums and winners in the games get a sense of competitiveness. Appraisals are awarded to the winners to motivate the young generation.