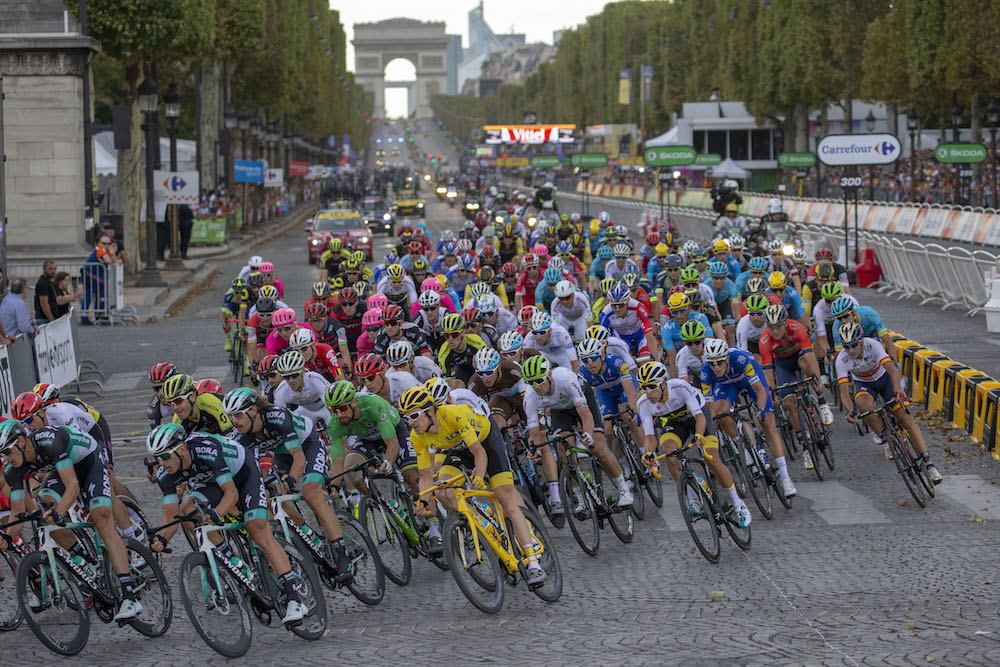 The Tour de France is an annual men's multiple stage bicycle race primarily held in France, while also occasionally passing through nearby countries. Like the other Grand Tours, it consists of 21 day-long stages over the course of 23 days. The race was first organized in 1903 to increase sales for the newspaper L'Auto and is currently run by the Amaury Sport Organisation. The race has been held annually since its first edition in 1903 except when it was stopped for the two World Wars. As the Tour gained prominence and popularity, the race was lengthened and its reach began to extend around the globe. Participation expanded from a primarily French field, as riders from all over the world began to participate in the race each year. The Tour is a UCI World Tour event, which means that the teams that compete in the race are mostly UCI World Teams, with the exception of the teams that the organizers invite.

Traditionally, the race is held primarily in the month of July. While the route changes each year, the format of the race stays the same with the appearance of time trials, the passage through the mountain chains of the Pyrenees and the Alps, and the finish on the Champs-lyses in Paris. The modern editions of the Tour de France consist of 21 day-long segments (stages) over a 23-day period and cover around 3,500 kilometers (2,200 mi).The race alternates between clockwise and counterclockwise circuits of France.

The Tour directors categorize mass-start stages into 'flat', 'hilly', or 'mountain'. This affects the points awarded in the sprint classification, whether the 3-kilometer rule is operational, and the permitted disqualification time in which riders must finish (which is the winners' time plus a predetermined percentage of that time). Time bonuses of 10, 6, and 4 seconds are awarded to the first three finishers, though this was not done from 2008 to 2014. Bonuses were previously also awarded to winners of intermediate sprints.

The first time trial in the Tour was between La Roche-sur-Yon and Nantes (80 km) in 1934. The first stage in modern Tours is often a short trial, a prologue, to decide who wears yellow on an opening day. The first prologue was in 1967. The 1988 event, at La Baule, was called "la preface. There are usually two or three-time trials. The final time trial has sometimes been the final stage, more recently often the penultimate stage.

The 18 UCI World Teams are automatically invited to the race. Additionally, Amaury Sport Organisation (ASO), the organizers of the Tour, invited four second-tier UCI Professional Continental teams to participate in the event. The three French teams and one Belgian team have each participated in the race before.

The teams entering the race will be:

The race will be visiting Binche, Saint-Di-des-Vosges and Pont du Gard for the first time as stage cities. The route will contain five mountain-top finishes, with the first coming on stage 6 to La Planche des Belles Filles. The other mountain-top finishes follow on stages 14 (on top of the Col du Tourmalet), 15, 19, and on stage 20, the penultimate day, at Val Thorens. The Col de l'Iseran, the highest paved pass in Europe, will feature on Stage 19. This will be the seventh time that the Tour climbs the 2,770 m (9,090 ft) Col de l'Iseran, but only the second ascent from the more difficult southern side.

Four main individual classifications are contested in the 2019 Tour de France, as well as a team competition. The most important is the general classification, calculated by adding each rider's finishing times on each stage. Time bonuses (time subtracted) are awarded at the end of every stage apart from the time trial stages. The first three riders receive 10, 6, and 4 seconds, respectively. For crashes within the final 3 km (1.9 mi) of a stage, not including time trials and summit finishes, any rider involved receives the same time as the group he was in when the crash occurred. The rider with the lowest cumulative time is the winner of the general classification and is considered to be the overall winner of the Tour. The rider leading the classification wears a yellow jersey. In a bid to animate racing, time bonuses of 8, 5, and 2 seconds respectively for the first three riders across a mountain summit will be given out at eight climbs. These will occur on stages 3, 6, 8, 9, 12, 15, 18, and 19. These bonuses replace the special sprints that were a feature in the 2018 edition.