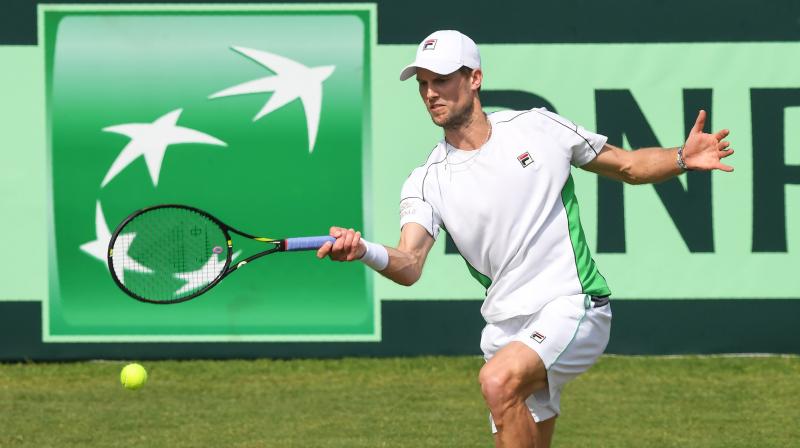 The Davis Cup is the premier international team event in men's tennis. It is run by the International Tennis Federation (ITF) and is contested annually between teams from competing countries in a knock-out format. It is described by the organizers as the "World Cup of Tennis", and the winners are referred to as the World Champion team. The competition began in 1900 as a challenge between Great Britain and the United States. By 2016, 135 nations entered teams into the competition. The most successful countries over the history of the tournament are the United States (winning 32 tournaments and finishing as runners-up 29 times) and Australia (winning 28 times, including four occasions with New Zealand as Australasia, and finishing as runners-up 19 times). The present champions are Croatia, who beat France to win their second title in 2018. The women's equivalent of the Davis Cup is the Fed Cup. Australia, the Czech Republic, and the United States are the only countries to have held both Davis Cup and Fed Cup titles in the same year. The Hopman Cup, the third competition for mixed teams, carries less prestige but is a popular curtain-raiser to the tennis season. Only the Czechs have won all three competitions in one calendar year, in 2012.

The idea for a tournament pitting the best British and Americans in competition against one another was probably first conceived by James Dwight, the first president of the U.S. National Lawn Tennis Association when it formed in 1881. Desperate to assess the development of American players against the renowned British champions, he worked tirelessly to engage British officials in a properly sanctioned match but failed to do so. He nevertheless tried to entice top international (particularly British) talent to the U.S. and sanctioned semi-official tours of the top American players to Great Britain. Diplomatic relations between Great Britain and the United Stated on the tennis front had strengthened such that, by the mid-1890s, reciprocal tours were staged annually between players of the two nations, and an ensuing friendship between American William Larned and Irishman Harold Mahony spurred efforts to formalize an official team competition between the two nations.

International competitions had been staged for some time before the first Davis Cup match in 1900. From 1892, England and Ireland had been competing in an annual national-team-based competition, similar to what would become the standard Davis Cup format, mixing single and doubles matches, and in 1895 England played against France in a national team competition. During Larned's tour of the British Isles in 1896, where he competed in several tournaments including the Wimbledon Championships, he was also a spectator for the annual England vs. Ireland match. He returned to exclaim that Britain had agreed to send a group of three to the US the following summer, which would represent the first British lawn tennis "team" to compete in the U.S. Coincidentally, some weeks before Larned left for his British tour, the idea for an international competition was discussed also between leading figures in American lawn tennis - one of whom was tennis journalist E.P. Fischer - at a tournament in Niagara-on-the-Lake, Ontario. Dwight F. Davis was in attendance at this tournament, and was thought to have got wind of the idea as it was discussed in the tournament's popular magazine, and Davis's name was mentioned as someone who might 'do something for the game put up some big prize, or cup'. Larned and Fischer met on several occasions that summer and discussed the idea of an international match to be held in Chicago the following summer, pitting six of the best British players against six of the best Americans, in a mixture of singles and doubles matches. This was discussed openly in two articles in the Chicago Tribune but did not come to fruition.

Nevertheless, the following summer, Great Britain - though not under the official auspices of the Lawn Tennis Association - sent three of its best players to compete in several US tournaments. Their relative poor performances convinced Dwight and other leading officials and figures in American lawn tennis that the time was right for a properly sanctioned international competition. This was to be staged in Newcastle in July 1898, but the event never took place as the Americans could not field a sufficiently strong team. A reciprocal tour to the U.S. in 1899 amounted to just a single British player traveling overseas, as many of the players were involved in overseas armed conflicts.

The 2019 Davis Cup will be the 108th edition of the Davis Cup, a tournament between national teams in men's tennis. It is sponsored by Rakuten. For this edition, the format of the cup is changed. The main modification is the World Group taking place at one location and in one week, with eighteen teams divided in six round-robin groups of three teams each, with the winners of the groups and the two best second places advancing to quarterfinals. The series between the teams in this stage will feature two singles matches and one doubles match, instead of the best-of-5 series, with the matches changing from best of 5 sets to best of 3. As the World Group will now take place as one single tournament, this event has been named as the Davis Cup Finals. The lower zone groups I and II will be composed of single ties deciding promotion or relegation.

The ITF has announced the nations that have secured a place in the 2019 Davis Cup by BNP Paribas Qualifying Round following the completion of this weekends World Group play-offs. The draw for the Qualifying Round will take place at the ITF offices in London on Wednesday 26 September 2018 at 15:00 local time (14:00 GMT). The draw will be streamed live on the Davis Cup website and Davis Cup Facebook page.

The eight winners of this weekends World Group play-offs join the four losing quarterfinalists from the 2018 competition as seeded nations in the 2019 Qualifying Round. The Qualifying Round ties will take place on 1-2 February 2019.

The 12 seeded nations for the 2019 Qualifying Round are (current Davis Cup Nations Ranking in brackets):

They will be drawn against 12 unseeded nations (six from Europe/Africa, three from Asia/Oceania and three from Americas), 10 of which have been confirmed based on their position on the Davis Cup Nations Ranking of Monday 17 September.

The unseeded nations for the 2019 Qualifying Round are (current Davis Cup Nations Ranking in brackets):

The two remaining nations from Europe/Africa will be confirmed after the Europe/Africa Zone Group I relegation play-offs in October: Portugal v South Africa (19-20 October) and Slovakia v Belarus (26-27 October). Two Europe/Africa Nation TBC slots will be drawn at the draw for the Qualifying Round.