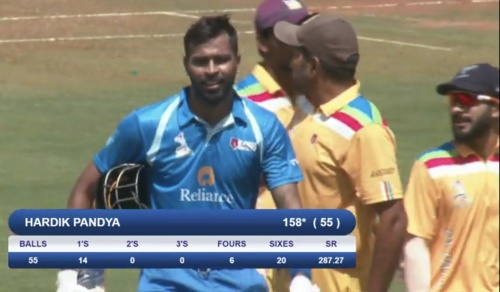 The international Indian player, Hardik Pandya, once again confirmed his great skill at the DY Patil T20 Cricket Championship in Navi Mumbai on Friday when he scored 158 defeats in just 55 balls to help Reliance 1 reach the 238/4 it held semi-final against Bharat Petroleum Kumbahi Association comprising 106 races with Saurabh Tewari (41 of 34 balls), then she became furious in recent clashes against players like Shivam Dubb and Sandeep Sharma.

Pandya, who scored a century against the CAG team in the group stage, achieved a triple score in 39 balls with three consecutive balls in 17 off  Rahul Tripathi. At the time, he had reached 14 six and 2 fours.