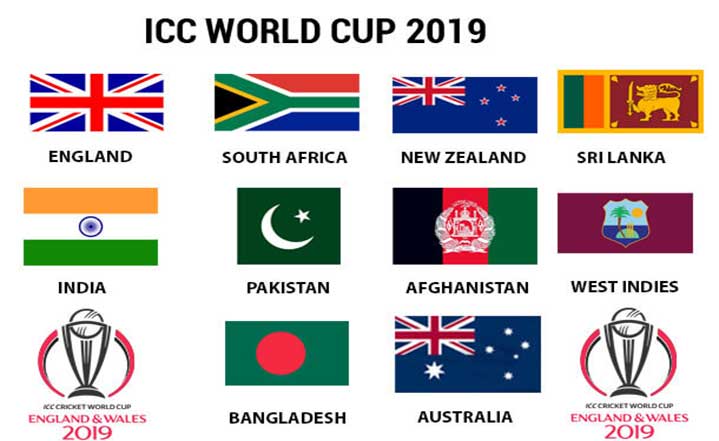 Cricket is agame that creates an atmosphere of excitement and intrigue. And every world cupthe fans wait for their favourite teams to play their hearts out on the ground.This year, the game is being hosted on the grounds of England and Wales.So letus see which teams are going to play this year!

England is thefounder of cricket. This country has always been on the World cup team,unfortunately has never won a cup. With a coach like Trevor Baeliss, Englandseems strong for the 2019 world cup.

The team wasgoverned by MCC from 1903 to 1996. Since, 1996 the team has been take over bythe ECP. England and Wales together represent the English Cricket team. Thecaptain of the ODI this year is Eoin Morgan.

The advantage ofthe team this year in the game is the fact that they are going to play on theirhome ground. England and Wales together are hosting the event this year.

South Africa hasalways been a cricket favourite for the cricket fans. Ever since their firstODI match in the year of 1991 against India, in the Eden Gardens, this team hasmanaged sufficient fan following.

This year theteam is being coached by Ottis Gibson. With Faf do Plessis as a captain, peopleare having high hopes about the team. The cricket governing body of CricketSouth Africa manages this team.

With a renownedcoach and an excellent captain, South Africa has an advantage of staying stringthis year.

India is astrong nation when it comes to a cricket match. Most of the population herestarts playing cricket ever since they have enough sense of sports. A strongteam under the coaching of Ravi Shastri, India seems to be one hard target thisyear.

The team has theODI captain, Virat Kohli leading it. India has won 2 world cups till date. BCCIheads the Indian national cricket team. The advantage of India this world cupis immense.

It has outdonemost of the excellent teams the entire last year. Hopefully, it is going tomaintain its stance.

Now who doesntknow about Australia and its love and passion for cricket! The 5 world cup winsare enough to prove how efficiently Australia manages to tackle their opponentsin the world cup.

This year theteam is coached by Justin Langer, the former Australian player. Captain, AronFinch, also has quite a repute to his name. The Australian Cricket team isgoverned by the Cricket Australia. This team always had an advantage, no matterwherever they have played.

This is onereason why it has an advantage this year as well. The team is surely fierce andstrong.

The Black Capshave earned quite a repute in the International Cricket for themselves over theyears. They played their first ODI against Pakistan in 1973. The governing bodyof the New Zealand cricket team is the New Zealand Cricket.

This year theteam has Gary Steed as the coach. While they have Kane Williamson as their ODIcaptain. New Zealand has won none of the World Cup Match until this day. Butthen again, the team has a great advantage when it comes to this world cup.

This year itcertainly is comprised of the strongest of players.

Pakistan hasalways been a strong and efficient ODI team. The team had played its first ODIagainst New Zealand. This team has Micky Arthur as its coach this year. Itscaptain, Sarfaraz Ahmed is an experienced and a great player.

The governingbody of Pakistan is Pakistan Cricket Board and it has managed the teamefficiently till date. Till date, Pakistan has won only 1 world cup and yet,has always found a position of itself on the list of the favourites. This yearthe team has a major advantage. It had performed greatly in the last ODI.

A relativelyyoung team, Bangladesh had proved its position in the game within just a fewyears of time. It has garnered enough attention worldwide making the strongteam out of itself. The first ODI Bangladesh played, was in the year of 1986against Pakistan.

The cricket bodyis governed by the Bangladesh Cricket Board. This year the team has SteveRhodes as the coach while it has MashrafeMortaza as its ODI captain. Till dateBangladesh has won none of the cricket world cups. Yet, this team has a majoradvantage as the rest of the teams have taken a notice of its strongperformance.

Sri-Lanka hadalways been a strong team. It had started its ODI career with the 1975 matchagainst the West Indies team. With constant experience and amazing players overyears of time, Sri-Lanka has managed to keep its grounds this year too.

Governed by theSri-Lanka Cricket, this team has been one of the favourites for the cricketfans. This year, the team is being coached by ChandikaHathurusinghe. The ODIcaptain to the team is Lasith Maringa.

It hasdefinitely managed to gain some of the wittiest players this year, making theteam advantageous.

Now Afghanistanis a very young and new team. But it is no less than the others. And how do weknow that? Well, in the recent past, it has defeated some of the strongestteams of all. This team being very new has not managed to achieve a world cup.But what it absolutely have managed is to garner enough attention.

This year theteam has Phill Simons as the coach. While it also has one of the strongestcaptains, in form of Asghar Afghan. The governing body, Afghanistan CricketBoard takes care of the team management and selection.

A very old andrenowned team, West Indies is qualified for this season. This team had alwaysbeen an excellent team. It had won the first two world cups as well. It steppedinto the ODIs with its match against England in 1973.

The Cricket WestIndies manages the team and its selection whereabouts. West Indies has a greatadvantage considering that it is a well-played team. It has an immenseknowledge about different grounds. This year, the team has Richard Pibus as itsinterim coach. While the team will be headed by the ODI captain, Jason Holder.