The BCCI  accepts the bilateral series in South Africa will also mean that it will have CSA's support if they want to regulate the IPL in the October-November window.

India and South Africa may play three T20 Internationals at the end of August, provided the situation arising out of the coronavirus pandemic improves substantially. Jacques Faul, Acting CEO of the CSA’s, said the accessories were currently scheduled for late August. Faul also spoke positively about the discussions that took place to play against India, but he added that much of this planning revolves around the closure and what the South African government will allow and what it does not allow.
"We had a good discussion with them (BCCI)," added the CSA  executive director.

“We are engaging via SASCOC with the Minister (Sports, Arts and Culture, Nathi Mthethwa). We are looking for a meeting with the Minister to obtain permission if necessary to play behind closed doors, and this relates to the possibility of touring India and other incoming tours.

"We are trying to be creative because it is an important tour to us." 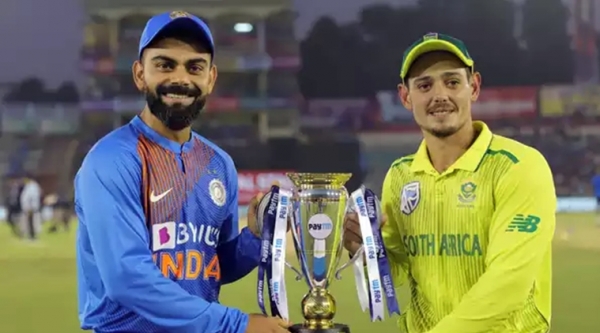 " Leading to that, Dr. Manjra, who heads the COVID-19 Steering Committee, is doing a great job. We are still guiding ourselves. A lot is being done regarding scenario planning."

The fact that BCCI accepts this binary series will also mean that they will get CSA support if they want to organize IPL in the October-November window instead of the T20 World Cup.

Given the rapid development of the situation, the CSA  confirmed that the chain will be subject to mandates from the highest authorities in India and South Africa.

Fall said they have already started the process of applying for permission from the South African government. "We are seeking, through Sascoc, to meet with the Minister of Sports to obtain approval, if necessary, to play behind closed doors."

This will specifically relate to the possibility of an upcoming Indian tour. "

The CSA also confirmed that the India tour was not the only one they were working on. "We are dealing with the West Indies Cricket Council regarding the postponed tours and the FTP," he said.

"We are trying to find opportunities after his (West Indies) tour to England to see how we can fit this chain, whether on neutral ground or wherever we are allowed to play. We have to see where we sit. By August and what are the restrictions on cricket International. "