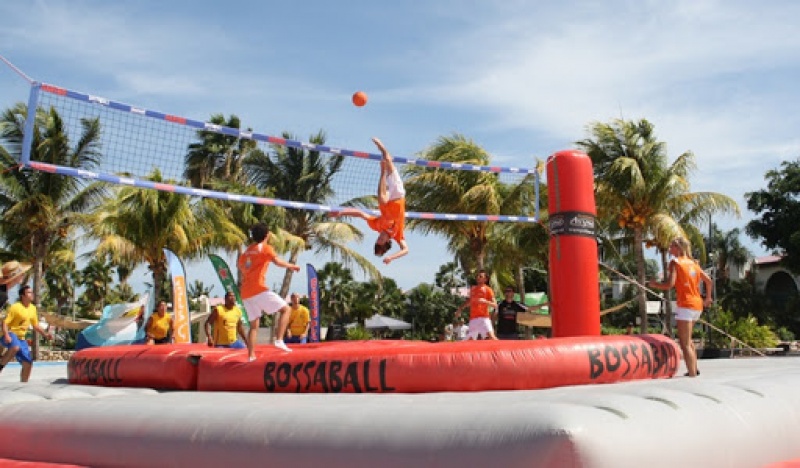 What is Bossaball?Bossaball is a uniquely acrobatic and energetic game, an exciting mix of sport, music and lots of fun. Incorporating elements of volleyball, football, and gymnastics, bossaball is played on a specially designed inflatable platform integrated with a trampoline in the middle. Although bossaball can be played without music, the Busa Nova tone (hence the name " Bossaball"), which generally defines the game frequency, is an important feature of the sport. During large-scale events, the bossaball game is usually supervised by "Samba Referee" who simultaneously assumes the role of master of the party and DJ of the event.Bossaball, an exciting sport like no other, has been shown alongside major events that include not only sports but also music, beach, and city festivals. Often times, the audience is surprised by the players who offer fierce services, punches, and nails with a lot of taste and style. At the same time, accompanying music creates a festive atmosphere in which viewers enthusiastically participate in the celebration.Bossaball HistoryBossaball is a relatively new sport invented by Filip Eyckmans , originally from Belgium. The sport was officially launched in the world in 2004 and has since been introduced in many countries in Europe, Latin America and the Middle East. Bossaball was launched in countries such as Belgium, Spain, the Netherlands and Brazil. Netherlands is the only country to have a major league in the league.Bossaball was introduced to Singapore in late 2007 by Muhammad Saifuddin, founder of Bossaball Singapore. In 2009, Singapore sent a team to participate in the Bossaball World Cup in Turkey. Other countries that have participated are Brazil, Belgium, Netherlands, and Kuwait. Singapore is one of the first countries to actively promote Bossaball in society and sport is now included in physical education lessons in some schools.Rules (how to play)Similar to volleyball, the goal in Bossaball is to place the ball on the opponent's side of the field. This relatively new sport is basically a volleyball game filled with gymnastics and soccer techniques. However, there are differences that players should be familiar with. According to Bossaball Singapore, here are the official Bossaball championship rules:There are two opposing teams consisting of 4 to 6 players in each group.Only one person is allowed in the trampoline section on every aspect of the court (for security reasons) Each team is allowed up to 5 touches (in one game) before sending the ball to their opponents.Players can use any part of their body, for example. For example hands, head, or feet - to touch the ball. Players can only touch the ball once with their hands. However, a second consecutive touch by the same player is allowed as long as the players use other parts of their bodies (such as their legs or head) to hit the ball. These touches are commonly known as "soccer touch". A "soccer touch" is necessary on a course of 3 touches or more. When the attack shot occurs in the inflatable areas of the opponent's court, a point or 3 points is awarded to the scoring team if the scoring touch is performed using the hand or other parts of the body, respectively. When the attack shot falls on the trampoline section of the opponent's court, the scoring team is awarded 3 or 5 points if the scoring touch is made using the hand or other parts of the body, respectively.The play comes and goes until the team drops the ball onto the opponent's team. The first team to score 25 points wins.How to get startedThe selected sport that draws influences from various Bossaball sources requires physical exertion but it is very exciting and fun. Clinics and workshops are organized from time to time. If you are interested in getting started with Bossaball, you can make an appointment to visit "Play! Bossaball @ Club Yuying" (47 Hougang Ave 1) any time from 9 AM until 9 PM on weekendsRead More: Bossaball Rules: How To Play Bossaball | Players and Equipment