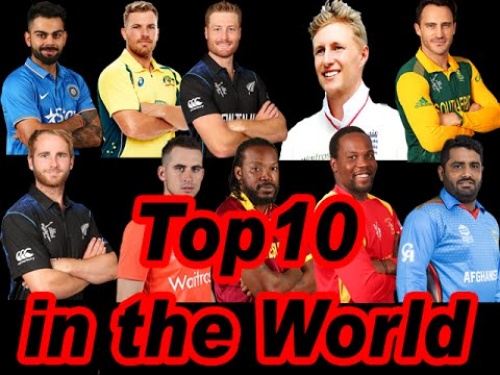 Kane WilliamsonHe was born on 8th August 1990 and is regarded as the best cricketer from New Zealand. He made the fastest 6000 runs in the traditional form of the game. He is the youngest player from New Zealand to have scored a century. He is currently the captain of the New Zealand cricket team and he even plays for Sunrisers Hyderabad in IPL. The player was positioned no. 1 on the ICC World Test rankings in 2015. He has even received the prestigious ‘Bayleys Real Estate Sportsman of the Year' award in 2015.Steve SmithHe was born on 2nd June 1989. He is an Australian international cricket player who is even the former captain of the team. He is known as the best batsman in the World in 2015,2016&2017 due to his countless remarkable performance. He has an amazing Test batting average of 61.37. It was in 2010 that Steve made his international debut. He is the only ODI player to have scored five consecutive 50s in the history of the World Cup. He was awarded the Sir Garfield Sobers Trophy and is the youngest to have received the honor. He was even named ICC Test Player of the Year in 2015&2017.David WarnerHe was born on 27th October 1986 and is the former captain of the Australian national cricket team. He made his international cricket debut in 2009 and is the first Australian batsman to have scored 7 ODI centuries in a single year. He is also an exceptional IPL player. David during his career has played 106 international matches till date and has scored 4343 runs. In 2018 due to the ball-tampering scandal, he was banned from playing domestic and international cricket for a year. After this, he returned in full form in the IPL team of Sunrisers Hyderabad in 2019.Chris GayleHe was born on September 21, 1979. He is a Jamaican player and plays cricket for West Indies along with IPL for Kings XI Punjab. He is the only player to have hit six off the first ball of a test match. He made his international cricket debut in 1999 and in 2005 he became the first player to score a Test triple century against South Africa. In 2007 World 20-20 he set the first record of being the highest scorer. In 2009 in a match against Australia he became the fifth-fastest century scorer in a test match. He has played a total of 50 T20 test matches till now with a run score of 1519 and in ODI he has scored 9727 runs in 284 matches.Brett LeeHe was born on 8th November 1976 in Wollongong, New South Wales. He was an Australian cricket player who played for the Australian cricket team and New South Wales Blue. During his career, he has taken more than 300 wickets and is one of the fastest cricketers World has known with fastest bowling delivery of 161.4 km/h. He has received the Donald Bradman Young Player of the Year award in 2000.Muttiah MuralitharanHe was born on 17 April 1972 in Kandy, Sri Lanka. He was a Sri Lankan cricketer whose unorthodox delivery made him one of the most effective and controversial spin bowlers in history. He became the second bowler in 2007 to have collected 700 test wickets. With his 709th wicket, he became the most prolific bowler in the history of test cricket. In the final match that he played, he took his 800th wicket and with this, he became the first bowler in history to reach that seemingly unreachable mark.Brian LaraHe was born on May 2, 1969, and is popularly known as the ‘Prince of Trinidad’ and ‘Prince of Port of Spain’. He played for the West Indies cricket team and is among the seven players who have scored more than 10000 runs in both Test and ODI. He is a legendary cricketer who gained prominence for playing big knocks and holds many records.  He holds the record for an individual test score of 400 not out. The player has scored nine double centuries in test cricket and was even inducted into ICC Hall of Fame in 2012. In April 2006, Lara was appointed as the captain of the West Indies. The player is an honorary member of the Order of Australia.Wasim AkramHe was born on June 3, 1966, in Lahore. He is a Pakistani cricket player who is generally regarded as the greatest left-handed bowler of all the time. He is the one who leads Pakistan to the World Cup championship of ODI cricket in 1992. He has seized 414 wickets in test cricket out of which 192 were clean bowled which is the highest of any cricketer. With 23 four-wicket hauls in ODIs, he is the only bowler. He was even signed in as the bowling coach for 2010 IPL and mentored the franchise for 5 years. He continues to serve as a mentor for KKR in IPL.Shane WarneShane Keith Warne, an Australian cricketer was born on September 13th, 1969. He was one of the most effective bowlers in history. he became the first bowler to take 700 test wickets in 2006. His success brought the art of leg-spin which was dominated by fast bowling. In 2000 Warne was named one of the Five cricketers of the century by Wisden cricketers’ Almanack. In his career, he has taken a total of 708 test wickets. He took retirement from test cricket in 2007 but continued to compete on the club level until 2011.Jacques KallisHe was born on 16th October 1975 and is a former South African cricketer. Kallis was one of the world’s leading all-rounders between 1998 and 2002. At the age of 23, he led South Africa to the ICC Champions Trophy title with two “Man of the Match” and the “Player of the Series” performances. He has even played for KKR in IPL. He is the only cricketer to score more than 10000 runs and took over 250 wickets in both ODI and test match cricket along with 131 ODI catches. He finally retired in 2014.Read More: IPL 2020 Auction: Date, venue and auction purse available for all eight teams