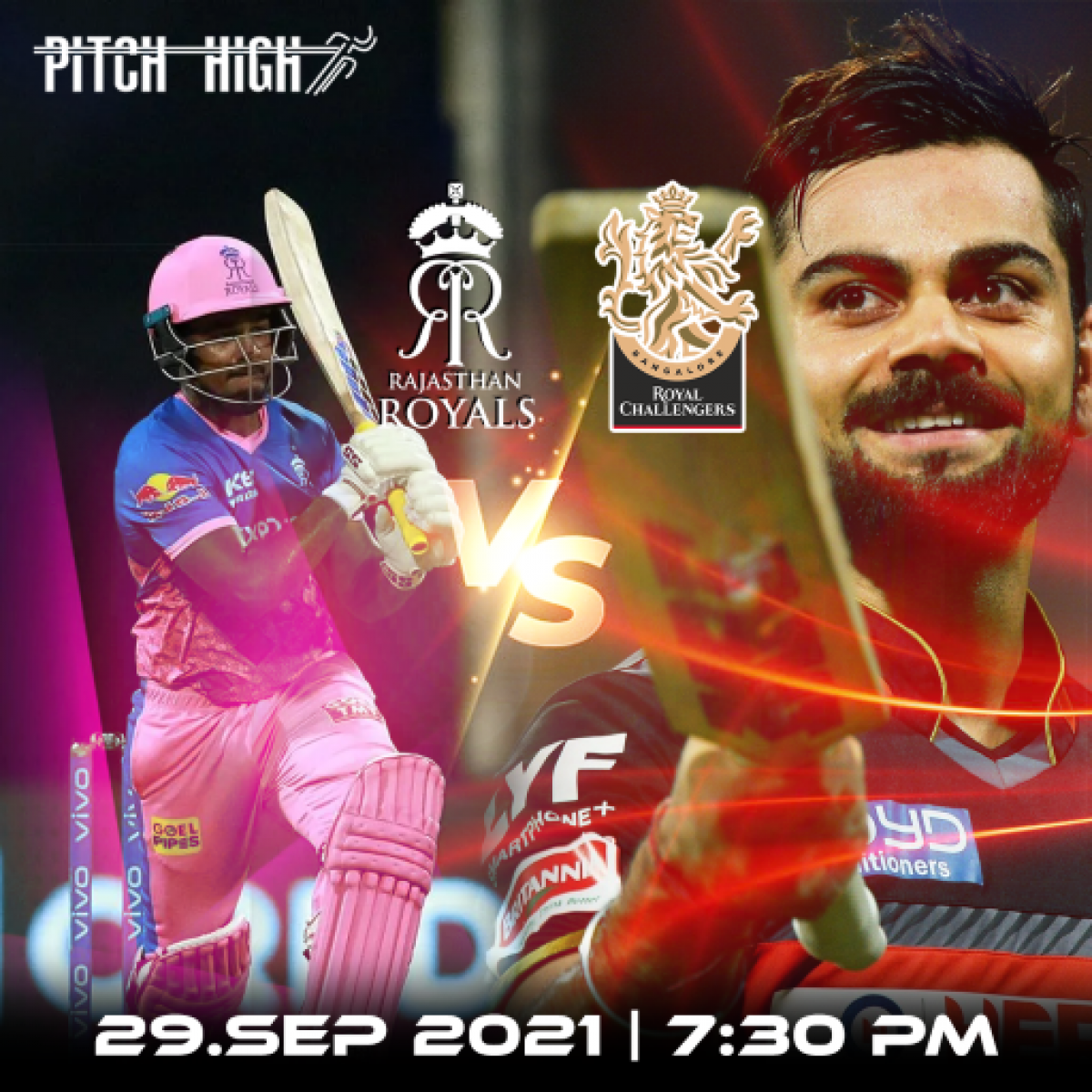 Rajasthan Royals horrible run of form continues as they were outplayed by the bottom-placed Sunrisers Hyderabad in their previous match on Monday. The unavailability of English players was a big problem for Rajasthan. Sanju Samson is doing his best in every match and now its time for the other players to step it. Royal Challengers Bangalore finally returned to their usual pace with a huge victory over defending champions Mumbai Indians by 54 runs on Sunday. Glenn Maxwell's overall show gave them their sixth win in this IPL. They beat the Rajasthan Royals in their last 3 meetings, which can boost their confidence. The boys in red currently hold the third spot in the standings with 12 points.Match Details:Rajasthan Royals vs Royal Challengers Bangalore, Match 43Venue:Dubai International Cricket Stadium, DubaiDate & Time: September 29th at 7:30 PM IST, and at 6:00 PM local timeLive Streaming: Star Sports Network and Disney+HotstarPitch Report:The batters will get the complete reward for their shots if they hit through the line. The batters can also target the shorter boundaries on one side of the ground. The bowlers should effectively use the variations at the late end of the innings. Batting first is a good option here.Probable Playing XIs for RR vs RCB:Rajasthan RoyalsEvin Lewis, Yashasvi Jaiswal, Sanju Samson (c&wk), Liam Livingstone/David Miller, Mahipal Lomror, Riyan Parag/Shivam Dube, Rahul Tewatia, Chris Morris, Chetan Sakariya, Kartik Tyagi/Jaydev Unadkat, Mustafizur RahmanRoyal Challengers BangaloreVirat Kohli (c), Devdutt Padikkal, Kona Srikar Bharat (wk), Glenn Maxwell, AB de Villiers, Dan Christian, Shahbaz Ahmed, Kyle Jamieson, Harshal Patel, Mohammad Siraj, Yuzvendra ChahalTop Picks for RR vs RCB Dream11 Match:Top Picks ­– BattersYashasvi Jaiswal has scores of 36, 5, and 49 in the last three matches. He has really worked on his hitting abilities and just needs to back his instincts to better his numbers. Bangalore skipper Virat Kohli completed 10,000 runs in the T20 format in the last match against Mumbai Indians. He provided a solid start rto his side by scoring 51 runs. Overall in this edition, he has accumulated 307 runs at an average of 34.11.Top Picks ­– All-RoundersGlenn Maxwell was the player of the match against the Mumbai Indians for his complete all-round display. He used his switch hits quite well against the spinners, which turned out to be a masterstroke for him. So far in this IPL, he has scored 300 runs and has picked 3 wickets as well.Top Picks ­– BowlersMustafizur Rahman will be up against world-class batters like Virat Kohli, Glenn Maxwell, and AB de Villiers, but he can cause problems with his variations. He has scalped 11 wickets in this year’s IPL at an economy of 7.84. Picking wickets has become a habit for Harshal Patel in this IPL. He is leading the highest wicket-takers’ list by a long distance, with 23 scalps in 10 matches.Top Picks ­– WicketkeepersSanju Samson is doing his job well with the bat and behind stumps as well. He has scored two consecutive half-centuries in the last 2 matches.Suggested Playing XI No.1 for RR vs RCB Dream11 Fantasy Cricket:Sanju Samson (c), Kona Srikar Bharat, Virat Kohli (vc), Evin Lewis, Devdutt Padikkal, Yashasvi Jaiswal, Glenn Maxwell, Kyle Jamieson, Harshal Patel, Mustafizur Rahman, Chetan SakariyaSuggested Playing XI No.2 for RR vs RCB Dream11 Fantasy Cricket:Sanju Samson, Yashasvi Jaiswal, AB de Villiers, Virat Kohli, Evin Lewis (vc), Mahipal Lomror, Glenn Maxwell (c), Chris Morris, Yuzvendra Chahal, Mohammed Siraj, Chetan SakariyaRR vs RCB Must Picks for Dream11 Fantasy Cricket:Player  Statistics Dream11 Points Sanju Samson 433 runs 702 Yashasvi Jaiswal 156 runs 240 Virat Kohli 307 runs 494 Glenn Maxwell 300 runs and 3 wickets 546 AB de Villiers 230 runs 435 RR vs RCB Risky Captaincy Choices:Since top-order batters are doing a good job for RCB, AB de Villiers is coming in a finisher at the late end of the innings. Considering this he is a risky captaincy pick for your fantasy teams. Chris Morris is yet to pick a wicket in the second leg of the IPL, but he is a real match-winner in this format and had a great first phase, especially with the ball. You can take a risk and pick him as your fantasy team skipper.Player you should avoid:Kyle Jamieson is struggling to find his rhythm, he went wicketless in the last 2 matches. Considering his present form, it’s better to avoid him while making your fantasy teams.Also Read- England All Rounder Moeen Ali Retires From Test Cricket