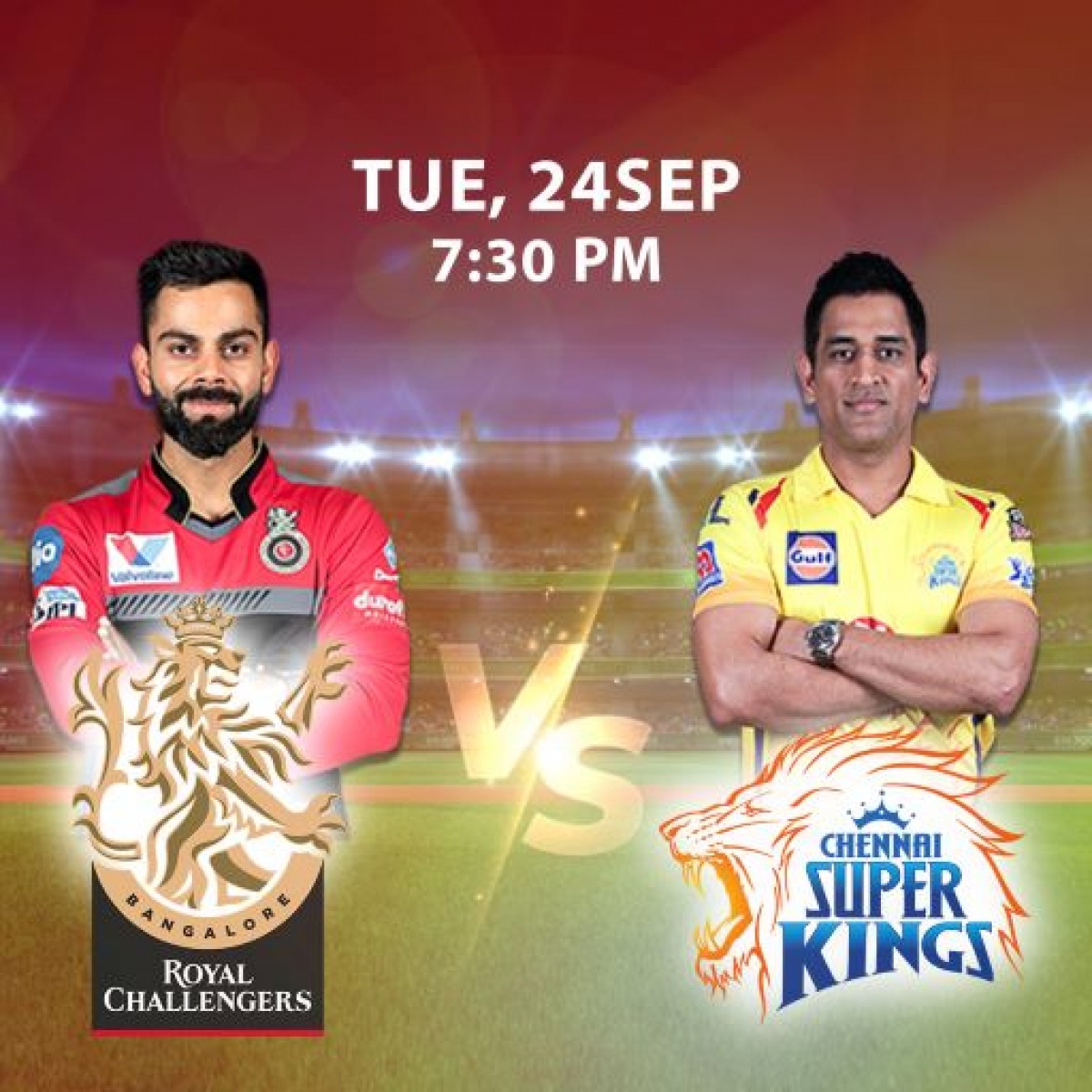 Royal Challengers Bangalore and Chennai Super Kings, will face off each other in match 35 of IPL 2021 on Friday. Royal Challengers had a bad last game against KKR, where they were bundled out for just 92 runs. They need to get over from the defeat and will be playing at a completely different venue compared to their last game. They are still placed at the 3rd spot in the standings with 10 points. On the other hand, Chennai Super Kings ruling this year's IPL. Despite losing 4 wickets in the power play for just 24 runs against Mumbai Indians, they did really well in the latter part of the innings to score 156 runs at the end of 20 overs. Sam Curran who missed the previous game due to quarantine is available for selection. With 6 wins and 2 losses, they placed themselves at 2nd spot in the standings with 12 points.Match Details: Royal Challengers Bangalore vs Chennai Super Kings, Match 35Venue:Sharjah Cricket Stadium, SharjahDate &Time:September 24th at 7:30 PM IST, and at 6:00 PM local timeLive Streaming: Star Sports Network and Disney+HotstarPitch Report:It’s one of the best batting wickets in the World. The boundaries are way too short on either side of the ground. Even the score of 200 plus is hard to defend here. Bowling first is a good option.Also Read- Virat Kohli to quit RCB captaincy after the end of IPL 2021 seasonProbable Playing XIs RCB vs CSK:Royal Challengers BangaloreVirat Kohli (c), Devdutt Padikkal, Srikar Bharat (wk), Glenn Maxwell, AB de Villiers (wk), Sachin Baby, Wanindu Hasaranga, Kyle Jamieson, Harshal Patel, Mohammad Siraj, Yuzvendra ChahalChennai Super KingsRuturaj Gaikwad, Faf du Plessis, Moeen Ali, Suresh Raina, Ambati Rayudu, Ravindra Jadeja, Sam Curran / Josh Hazlewood, MS Dhoni (c & wk), Dwayne Bravo, Shardul Thakur, Deepak ChaharRCB vs CSK Top Picks for RCB vs CSK Dream11 Match:Top Picks ­– BattersIt’s a well-made surface for Glenn Maxwell. He can fancy his chances of scoring big runs here at Sharjah Cricket Stadium. So far in this IPL, he has accumulated 233 runs in 7 innings at an average of 33.28 with the highest score of 78. Ruturaj Gaikwad played a rescue act in the last game against Mumbai Indians. He showed a great amount of character and remained not out in the end on 88* runs from 58 balls.Top Picks ­– All-RoundersRavindra Jadeja has a fond memory against RCB. He smashed 62* runs from 28 balls in their previous meeting in the 1st leg and even picked up 3 wickets at an economy of 3.25. Moeen Ali got out for a no score in the last match against Mumbai Indians. England all-rounder has notched 206 runs in 7 matches in this year’s IPL at an average of 29.42 and even picked up 5 wickets at an economy of 6.Top Picks ­– Bowlers Harshal Patel is the purple cap holder in this ongoing IPL. In 8 matches so far, he has picked up 17 wickets at an economy of 9 with the best figures of 5 for 27 and has 47 runs to his name with the bat as well. Deepak Chahar has picked the most wickets for Chennai Super Kings in this year’s IPL. In 8 matches he has grabbed 10 wickets at an economy of 7.57 with the best figures of 4 for 13.Top Picks ­– WicketkeepersAB de Villiers will be desperately hungry for the runs. He got out for a first-ball duck in the last match against Kolkata Knight Riders. However, one innings can’t define him. He is still an excellent pick for your fantasy teams.Suggested Playing XI No.1 for RCB vs CSK Dream11 Fantasy Cricket:AB de Villiers, Glenn Maxwell (c), Faf du Plessis (vc), Ruturaj Gaikwad, Devdutt Padikkal, Ravindra Jadeja, Moeen Ali, Wanindu Hasaranga, Deepak Chahar, Harshal Patel, Kyle JamiesonSuggested Playing XI No.2 for RCB vs CSK Dream11 Fantasy Cricket: AB de Villiers (c), Virat Kohli, Ambati Rayudu, Glenn Maxwell, Ruturaj Gaikwad, Devdutt Padikkal, Moeen Ali (vc), Sam Curran, Deepak Chahar, Harshal Patel, Mohammad SirajRCB vs CSK Must Picks for Dream11 Fantasy Cricket:Player Statistics Dream11 Points Glenn Maxwell 233 runs 350 AB de Villiers 207 runs 391 Ruturaj Gaikwad 284 runs 430 Moeen Ali 206 runs and 5 wickets 483 Devdutt Padikkal 217 runs 336 RCB vs CSK Risky Captaincy Choices:Virat Kohli has scored over 200 runs in this year’s IPL at an average of 29. You can take a risk and pick him as your fantasy team skipper. Sam Curran is back, and his inclusion will further add more balance to the CSK unit. You can take a risk and pick him as your fantasy team skipper.Player you should avoid:Suresh Raina is losing his charm as the year goes by, he averages 21.16 with the bat in this year’s IPL. It’s better to avoid him while making your fantasy teams.Also Read- Pakistan vs New Zealand: Entire tour called off due to security concerns minutes before 1st ODI 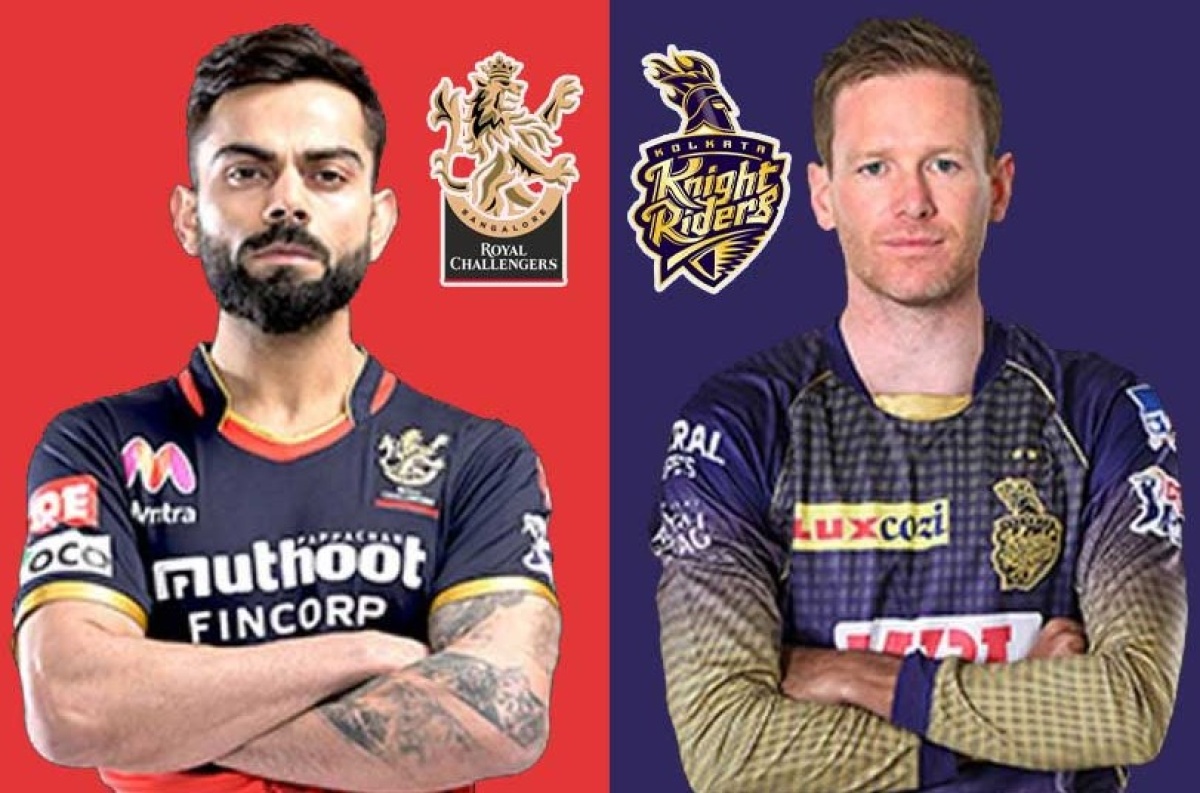 Royal Challengers Bangalore will go head-to-head against Kolkata Knight Riders in Eliminator of the IPL 2021. Royal Challengers Bangalore are still looking for their first IPL title and it is a perfect opportunity for them this year as they have secured the perfect mix of experienced and talented youngsters. They missed the chance to finish the race in the top two spots on the basis of net run rate, as Virat Kohli's men finished third in the standings with 18 points. However, they are still playing an excellent brand of cricket throughout this IPL and will be looking forward to do their best in the playoffs. On the other hand, Kolkata Knight Riders had an exceptional second leg of IPL, where they bounced back from the bottom half of the table and finished fourth in the standings. They relied mainly on youngsters, who did not disappoint them. They had won their last two matches and look to extend their winning streak. Whoever wins this match will go through to Qualifier 2, whereas the loser will be knocked out of the tournament.Match Details:Royal Challengers Bangalore vs Kolkata Knight Riders, EliminatorVenue: Sharjah Cricket Stadium, SharjahDate & Time: October 11th at 7:30 PM IST, and at 6:00 PM local timeLive Streaming: Star Sports Network and Disney+HotstarPitch Report:The surface here at Sharjah has become a bowling-friendly one and the batters have struggled to score runs. The highest score registered so far here in the 2nd leg is 171. The surface might get slow down as the game progresses and hence batting first is an excellent option.Probable Playing XIs for RCB vs KKR: Royal Challengers BangaloreVirat Kohli (c), Devdutt Padikkal, Kona Srikar Bharat (wk), Glenn Maxwell, AB de Villiers, Shahbaz Ahmed, Daniel Christian, George Garton, Harshal Patel, Mohammad Siraj, Yuzvendra ChahalKolkata Knight RidersShubman Gill, Venkatesh Iyer, Rahul Tripathi, Nitish Rana, Eoin Morgan (c), Dinesh Karthik (wk), Shakib Al Hasan, Sunil Narine, Shivam Mavi, Lockie Ferguson, Varun ChakravarthyTop Picks for RCB vs KKR Dream11 Match:Top Picks ­– BattersRCB skipper Virat Kohli hasn’t fired in the last couple of matches. However, he is a big match player and can deliver in this crucial game. In 14 matches in this edition, he has mustered 366 runs at an average of 28.15. Shubman Gill has scored 2 half-centuries in the last 2 matches, which is a positive sign for the Knight Riders ahead of playoffs. Overall in this tournament, he has scored 352 runs in 14 matches at an average of 25.14.Top Picks ­– All-RoundersGlenn Maxwell has made a massive impact with the bat for RCB, as he played a vital role in taking them till the playoffs. The Aussie has scored 498 runs in 13 innings at an average of 45.27, with the highest score of 78. Maxwell has chipped in with 3 wickets as well. Venkatesh Iyer is the new sensation of the second leg of the IPL. He has got good reach and can play the shots freely, which is giving him positive results. In 7 matches so far, he has scored 239 runs at an average of 39.83 and picked up 3 wickets as well.Top Picks ­– BowlersHarshal Patel has been consistently picking wickets for RCB this year. He is the current Purple Cap holder with 30 wickets in 14 matches, with the best figures of 5/27. Varun Chakravarthy has been the pick of the bowlers from Knight Riders in this edition. Tamil Nadu’s deceptive spinner has picked up 16 wickets in 14 matches at an economy of 6.5, with the best figures of 3 for 13.Top Picks ­– WicketkeepersKona Srikar Bharat became a hero by hitting a last-ball six to win a match for RCB against Delhi Capitals. He was the player of the match for his match-winning knock of 78* runs from 52 deliveries.Suggested Playing XI No.1 for RCB vs KKR Dream11 Fantasy Cricket:Kona Srikar Bharat, AB de Villiers, Rahul Tripathi, Shubman Gill, Devdutt Padikkal, Glenn Maxwell (c), Venkatesh Iyer (vc), Yuzvendra Chahal, Harshal Patel, Shivam Mavi, Varun Chakravarthy Suggested Playing XI No.2 for RCB vs KKR Dream11 Fantasy Cricket:Kona Srikar Bharat, Nitish Rana, Virat Kohli, Rahul Tripathi (c), Sunil Narine, Daniel Christian, Glenn Maxwell, Venkatesh Iyer, Harshal Patel, Mohammed Siraj, Lockie FergusonRCB vs KKR Must Picks for Dream11 Fantasy Cricket:Players Statistics Dream11 Points Glenn Maxwell  498 runs 3 wickets 848 Kona Srikar Bharat 182 runs 284 Shubhman Gill 352 runs 547 Venkatesh Iyer 239 runs and 3 wickets 452 Varun Chakravarthy 16 wickets 576 RCB vs KKR Risky Captaincy Choices:AB de Villiers is a finisher for RCB. He has not got adequate chances in this leg, but the South African can be backed to deliver whenever needed. It’s worth a risk to pick him as your fantasy team skipper in the big match. Sunil Narine has picked up 10 wickets in 11 matches in this IPL at an economy of 6.52. You can take a risk and pick him as your fantasy team skipper.Player you should avoid:George Garton has picked up 3 wickets in 4 matches so far in this IPL. Considering his average performances, it’s better to avoid him while making your fantasy teams.Also Read- PCB can collapse if India wants as ICC getting 90 per cent of its funds from there: Ramiz Raja