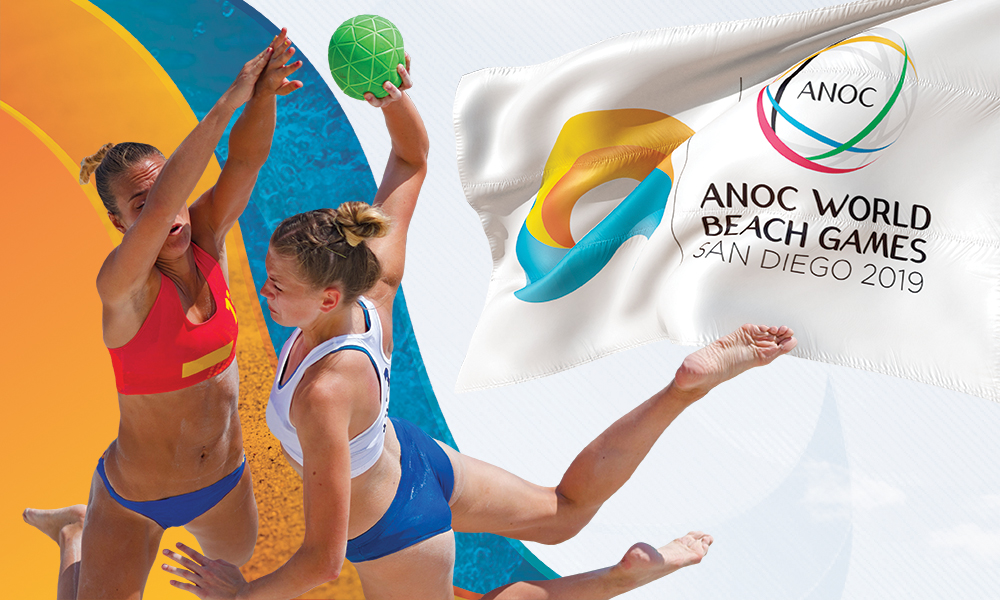 TheWorld Beach Gamesare an international multi-sport event organized by theAssociation of National Olympic Committees(ANOC). The games are held every two years. The first edition was planned to be held inSan Diego,the United States from 10 to 15 October 2019,but was later relocated toDoha,Qatarafter San Diego failed to raise the necessary funding. On 14 June 2019, ANOC announced Qatar as the host of the 2019 World Beach Games because of its spectacular oceanfront locations". The event will now be held from October 12-16.

The 2019 World Beach Games officially known as the ANOC World Beach Games Qatar 2019 and commonly known as Qatar 2019, is an inaugural international beach multi-sport event organized by the Association of National Olympic Committees (ANOC). It is scheduled for five days, 12 to 16 October 2019, in Doha, Qatar, with the opening rounds of certain events being held on 11 October 2019, the day before the opening ceremony on 12 October.

It had originally been scheduled to be hosted in San Diego, however, on 30 May 2019, it was announced that the Games were being relocated as the host city had not generated sufficient private funds. ANOC said the event would still take place in 2019 and would be relocated to another host city that has "the financial guarantees necessary and a proven track record to host a world-class event." In 14 June 2019, Qatar was announced as the host of the 2019 World Beach Games.

On 30 October 2015, San Diego was unanimously approved as host of the inaugural World Beach Games at the ANOC General Assembly in Washington, DC, Sarasota, Sochi, Dubai and a city in China were the other candidate cities which made bids to host the games.

Due to challenges with securing the necessary sponsorships for the inaugural 2019 ANOC World Beach Games in San Diego this October, and the time sensitivity, we have regretfully learned the Association of National Olympic Committees (ANOC) has decided to withdraw the event from San Diego.

San Diego has a long history of successfully hosting major events, including Super Bowls and World Series among others. The planned athlete experiences and excellence of our venues have been always to be of the highest quality. At the end of the day, we simply could not reach financial agreements that were amenable to both sides. This was a first-time event with no historical private-sector support and we were prepared to meet ANOCs goals. While disappointed in ANOCs decision, we will remain in communication with their team.

We greatly appreciate everyones work on diligently preparing our city for the games. While it may not happen this year, the San Diego Exploratory Foundation will continue pursuing opportunities to host many more exciting activities in the future.

When the ANOC President Sheikh Ahmad Al-Fahad Al-Sabah (Kuwait) was elected in April 2012 his stated objective was to reform, modernise and professionalise the organisation in order to better serve the needs of the worlds NOCs.

Under Sheikh Ahmads visionary leadership, ANOC has strived to protect and advance the collective interests of the NOCs by delivering an unprecedented level of assistance and support. The set-up and objectives of the nine new ANOC Commissions and Working Groups (which include representatives from all five continental associations) in December 2013 is the latest innovation in achieving this aim. The creation of Commissions and Working Groups will ensure that finding solutions to the most important issues facing the NOCs is kept at the very forefront of ANOCs agenda.

ANOC also aims to strengthen the relationships between the NOCs and the Olympic Family for the benefit of the entire Olympic Movement. By facilitating and opening up a new dialogue, ANOC is committed to forging more productive and collaborative working relationships between NOCs and International Federations (IFs) in particular.

ANOC also has a number of strong relationships with other organisations including UNESCO. ANOC has representatives in a number of IOC Commissions, in particular in the Coordination Commissions for Olympic Games; the World Anti-Doping Agency (WADA); the Court of Arbitration for Sport (CAS); and the International Council of Arbitration for Sport (ICAS).

Beach Soccer will stand as one of the main attractions at the upcoming World Beach Games 2019, which will take place in Doha (Qatar) between 12th and 16th of October.

The Games Organizing Committee included beach soccer as one of the key sports for this maiden edition of this global Olympic showpiece, organized by ANOC (Association of National Olympic Committees).

Gabino Renales, Deputy Vice President of BSWW, highlighted the importance that represents the growth of the sport. Our role in the ANOC World Beach Games 2019 represents a new remarkable step ahead for beach soccer.

In the last years we have been gaining more and more international importance, and getting closer to the Olympic core with different events, such as the European Games, the Asian Beach Games, amongst others.''

Both Mens and Womens competition (16 and 8 teams, respectively) will feature in beach soccer in the World Beach Games 2019.

More than 4.000 athletes and officials are expected in this first edition of the World Beach Games.