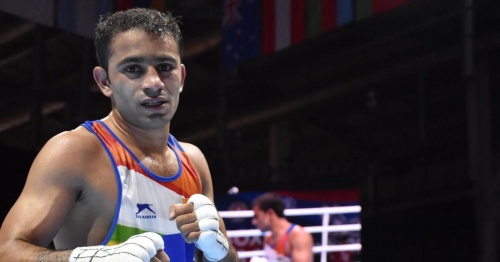 The global silver medal Amit Panghal (52 kg) was ranked first by the International Olympic Committee's boxing staff before the Olympic qualifiers next month, which made him the first Indian boxer in more than a decade to reach first place in its class.

In 2009, Olympic bronze medalist Vijender Singh did it for the first time after opening India's World Championship account in bronze at 75 kg.

Panghal, 24 years old, is ranked first with 420 points, according to the list published by the International Olympic Committee's Boxing Task Force (IOC), which is responsible for running sport at this time.

"It feels great and that means a lot to me because it will help me to be first in the playoffs," Panghal told PTI. "Being No. 1 in the world also gives you a renewed sense of confidence."

"I hope I can win an Olympic place in the first qualifiers," the little boxer told Rohtak.

The IOC Olympic Qualifying Team and Main Event will be held later this year in Tokyo, where the International Boxing Association (AIBA) is currently suspended due to poor financial and administrative management.

Panghal has had a massive career since 2017, winning gold medals at the Commonwealth Games and Asia 2018.

Last year, he became the first Indian to win a silver medal at the World Championships after beating gold in the Asian meeting.

In the women's ranking, MC Mary Kom six-time world champion ranked fifth in the 51 kg category. Mary Kom, who won an unprecedented world medal from the eighth, one bronze, last year, got 225 points. His opponent, Nikhat Zareen is 22nd with 75 points.

However, the best Indian player among the boxers is Lovlina Borgohain, who is third in the 69 kg category. Borgohain, 22, has twice won the bronze medal in the world.

The continental Olympic Qualifiers in Dakar (Africa), Oman (Asia), London (Europe), Buenos Aires (America) and the World Final Qualifiers in Paris awarded more points to ensure that the winners of these events are guaranteed to seed. Olympic Games.

Read More:  Schedule of Hockey Test Event in the Olympic