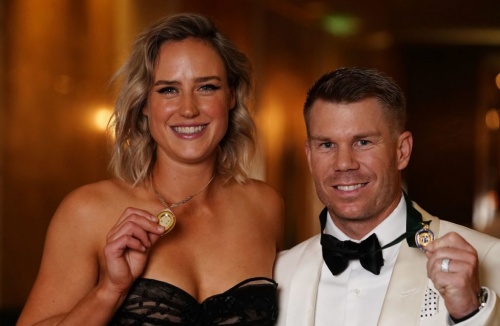 David Warner's attempt to extricate himself after the Ball Play scandal took another step with the first mixture to receive the highest honor for cricket in Australia.

The 33-year-old divider won the medal for Allan Border for the third time, beating Steve Smith, who also took part in trying to change the ball with sandpaper during South Africa's test in 2018.

Pat Cummins, the ICC's test player of the year, ranked third in the award voted by other players, media and referees.

"When it's very close, you really don't know, so it's surprising to be honest," said Emotional Warner at the party Monday night.

"I had no doubt that I had the ability to go back and be here again.

Warner and Smith were punished with a one-year ban due to their role in the ball-scandal scandal, while Cameron Bancroft received nine months.

They were received back into the Australian fold when their comment period ended in March last year.

Smith was the undisputed star keeping Ashes in England last year, a series that Warner has never called, with 95 racing in 10 innings.

But the first match was Australia's best player in the one-day World Cup Finals, where he scored 647 races at a rate of 71.88 and excelled in the Twenty20 series against Pakistan and Sri Lanka.

He then disarmed the young bowling attack in Pakistan in a series of the following two tests, which included 335 personal records in Adelaide.

Allrounder Ellyse Perry joined Warner as a three-time winner by winning her third Belinda Clark Award as a prominent player.