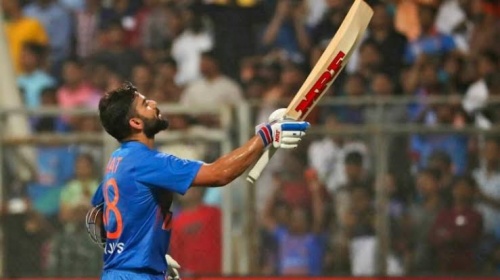 Virat Kohli, who scored 183 runs from 3 matches in the T20I series against West Indies, has moved back into the top 10 of the ICC rankings for T20I batsmen.

Virat Kohli has entered the ICC's top 10 rankings at T20 International after advancing from the lead in India's 2-1 series victory over West Indies.

Virat Kohli, the joint T20Is top scorer with Rohit Sharma, managed 94 not out in Hyderabad before falling on 19 in Thiruvananthapuram. With the series on the line, Kohli came out with all the aggression to score 70 runs from just 29 balls.

Not surprisingly, Virat Kohli was named the man-of-series for his amazing performance. In addition, Virat Kohli moved 5 places to number 10 in the ICC T20I batsmen rating.

KL Rahul, who was named Man-of-the-Match in Mumbai T20I, moved three places to No. 6, while Rohit Sharma, whose only important match in the series was in Mumbai, slipped to ninth.


It was another exciting year for Virat Kohli. He is already the best player in ODI and Test, is likely to end 2019 as the top scorer in international cricket for the fourth year in a row.