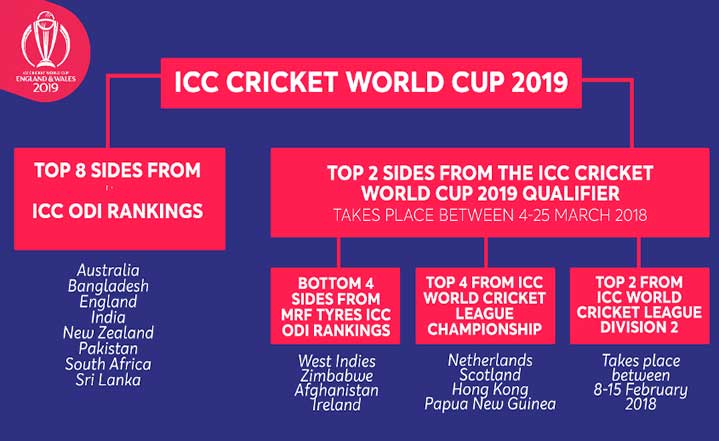 From May 30, 2019, to July 14, 2019, all eyes of cricket playing nations and fans from around the world would be on the Quadrennial ICC Cricket World Cup to be played in England and Wales. Fans from around the world would cheer for their favorite teams during the 2019 ICC Cricket World. In its 12th edition, the event returns home as fans in England and Wales would say after a gap of two decades. With ICC having brought down the number of participating teams to 10 from the highs of 14 and 16 this edition is expected to be the most competitive ever.

Here I present a predictive analysis model for the 2019 mensCricket World Cup. I believe this predictive analysis strategy would be very useful for viewers, sponsors, and team strategists. This would also give insights to various cricket analysts and commentators about the features that play a crucial role in the statistical analysis.This model is developed based on the historical data collected for the 10 participating teams (Afghanistan, Australia, Bangladesh, England, India, New Zealand, Pakistan, South Africa, Sri Lanka, and West Indies). In addition, we test our model on 2015 world cup data and measure the accuracy of predictions. This model is developed based on the players who were a part of their respective teams/squads in the recently 5 concluded tournaments.

After the demolition of West Indies in Manchester India have one foot in the semi-final of the ICC cricket World Cup.

Up next for Virat Kohli and Co. are the hosts and pre tournament favourites England at Edgbaston, coincidentally a venue where the both teams met in the 1999 and England were eliminated from the tournament.

India go into the match unbeaten in the tournament so far, winning five matches, while the match against New Zealand was washed out. England on the other hand come into the tie at Edgbaston in poor form having lost their last two matches against Sri Lanka and Australia respectively.

A loss for the hosts would make it very difficult for them to qualify for the semis and given their top billing before the World Cup would be a massive shock.

India for their part would be looking to pile further misery on England and looking to send them packing at the earliest possible opportunity.

We are now entering the final week of the 2019 ICC Cricket World Cup group stage and three semi-final spots have been confirmed by the likes of Australia, England and India. The fourth and final spot in the World Cup knockouts will be revealed on Friday after the game between Pakistan and Bangladesh.

Meanwhile, ESPN Cricinfo observed that Indian cricketing legend Sachin Tendulkar has been spot on with his predictions from May, correct to every single detail. More than a month ago, Tendulkar had predicted the teams who he thought would qualify for the semi-finals of the World Cup.

India, England, Australia should be in the semis. The fourth could be one of New Zealand or Pakistan, the batting maestro had said, when he was asked about his favourites to reach the final four.

Earlier, the 46-year-old had also said he was sure of Team India qualifying to the semi-finals, as he believed that they had a well-balanced squad.

We have a balanced team which can go out and do something special. The whole team has to chip in, there will be some performers (in different situations, who must say) this is my game; I am batting well or bowling well. Support is needed from the other end also, the Master Blaster had said, while speaking with Hindustan Times.

As mentioned above, the fourth and final team who will qualify for the semi-finals will be revealed on Friday, based on the outcome of the Pakistan-Bangladesh game. If Pakistan win by a huge margin, they may reach the knockouts or else it will be the Kiwis who book their place in the final four.

With less than a fortnight to go before the World Cup kicks start, predictions are coming thick and fast from veteran cricketers and pundits of the game. England, the host nation, emerge as the top favourites, followed by the Virat Kohli-led Indian side.