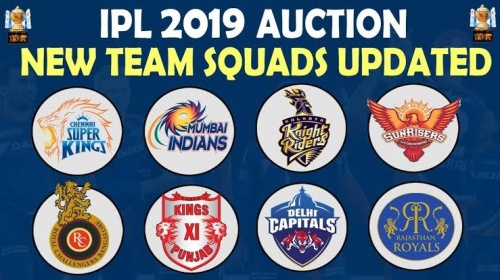 IPL 2020: Full list of all eight updated squads after auction

As expected, pacers continued to rule the roost as the eight franchisees splurged a combined sum of Rs. 140.30 crore on 62 players who were sold during the 13th Player Auction of the Indian Premier League on Thursday.

Most expensive signing: Pat Cummins (Rs. 15.5 crores, Kolkata Knight Riders) - most expensive overseas player in the history of IPL and the second-highest bid in IPL auctions so far

The player auction for IPL 2020 got completed in Kolkata on Thursday with a number of players - both well-known and relatively unknown ones - making headlines throughout the day. While Pat Cummins (15.50 Crores) made history by becoming the 2nd most expensive player in IPL history, big names like Dale Steyn almost didn't find any takers, till the very last minutes when Royal Challengers Bangalore snapped him up for his base price of 2 crores.

Here are how the full squads of all the 8 teams stack up after the auction: