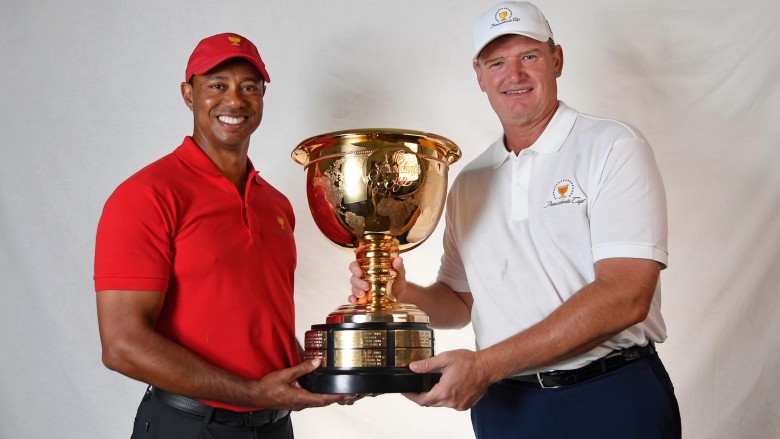 ThePresidents Cupis a series of men'sgolf matches between a team representing theUnited Statesand an International Team representing the rest of the world minusEurope. Europe competes against the United States in a similar but considerably older event, theRyder Cup. The Presidents Cup has been held biennially since 1994.Initially, it was held in even-numbered years, with the Ryder Cup being held in odd-numbered years. However, the cancellation of the2001 Ryder Cupdue to theSeptember 11 attacks pushed both tournaments back a year, and the Presidents Cup is now held in odd numbered years. It is hosted alternately in the United States and in countries represented by the International Team. Until the 2005 event, prior to the start of the final day matches, the captains selected one player to play in a tie-breaker in the event of a tie at the end of the final match. Upon a time, the captains would reveal the players who would play a sudden-death match to determine the winner. In 2003, however, the tiebreaker match ended after three holes because of darkness, and the captains, Gary Player and Jack Nicklaus, agreed that the Cup would be shared by both teams.

The Presidents Cup began in 1994 as an exhibition team event between an American team made up of U.S. citizens and an International team made up of golfers from outside the U.S. and Europe. It is held biennially, alternating years with the Ryder Cup competitions.

The Presidents Cup used to be held in even-numbered years, but the September 11th attacks forced the postponement of the 2001 Ryder Cup by a year. The Presidents Cup followed suit and moved the 2002 event to 2003.

The first two Presidents Cups, in 1994 and 1996, were held at Robert Trent Jones Golf Club in Virginia, after which the event alternated between U.S. and International courses.

The U.S. team has long dominated the event, unlike their recent performance at the Ryder Cup. The Americans hold an incredible record of 11-1-1. The International team picked up their only win at the 1998 event at Royal Melbourne, the site of the 2019 Presidents Cup.

The 2003 Presidents Cup in South Africa famously ended in a tie. Those teams were led by all-time legends Jack Nicklaus and Gary Player. After finishing the event tied 17-17, Tiger Woods and Ernie Els faced off in a playoff to determine the winner. The two stars were still deadlocked after three holes, so, with the sun setting on the South African course, Nicklaus and Player huddled together and decided to share the trophy between the two teams, thus ending the competition. Woods and Els will continue their rivalry as opposing captains at the 2019 Presidents Cup.

Here are the current Top 10 in the International Presidents Cup standings (as of June 5, 2019):

The Presidents Cup standings are different for each team.

The U.S. employs a system tied closely to FedEx Cup points. The eight American players who earn the most  FedEx Cup points from the 2017 BMW Championship through the 2019 Presidents Cup will automatically qualify for the team.

But not all FedEx Cup points are judged equally. Instead, the U.S. team imposes a weighting system on the points. Each FedEx Cup points earned from the 2017 BMW through the 2018 Tour Championship equals one point in the Presidents Cup standings. Each point earned during the 2018-19 season ending at the 2019 Tour Championship equals two Presidents Cup Standings points.

Finally, the last four spots on the team will be selected by the U.S. captain and vice captains.

As is the case with the U.S. team, the final four spots on the International side will be selected by the captain and vice captains.

WHERE IS THE PRESIDENTS CUP THIS YEAR?

When is the Presidents Cup?

This years Presidents Cup will be held December 12-15, which is early in Australias summer season.

Who are the 2019 Presidents Cup captains?

For the 2019 Presidents Cup, the U.S. team will be led by first-time captain Tiger Woods. He will be opposed on the International side by another first-time captain, Ernie Els. Woods has chosen Steve Stricker, Fred Couples and Zach Johnson as his vice captains. Els tapped Mike Weir, Trevor Immelman, Geoff Ogilvy and K.J Choi to be vice captains on the International team.

The Presidents Cup format differs slightly from that of the Ryder Cup.

There will be a total of 30 matches worth 30 points at the 2019 Presidents Cup. The matches will be contested over four full days. Day 1 of the competition on Thursday features five foursomes matches, with two golfers per team in each match. Those are followed by five four-ball matches on Friday. Saturday will feature two sessions with a total of eight matches: four foursome matches in the morning and four four-ball matches in the afternoon. Finally, the final round on Sunday includes 12 singles matches.

Read More: ALL ABOUT THE SOUTHEAST ASIAN GAMES 2019