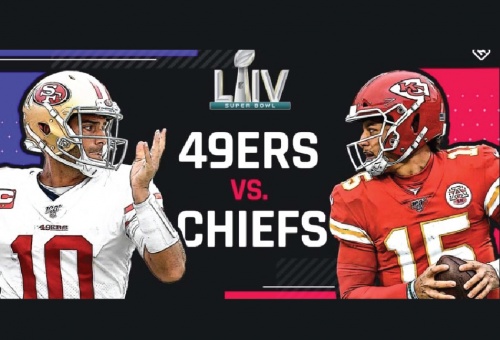 49ers and the Chiefs facing off at the Super Bowl 2020

The Super Bowl is the annual championship under the National Football League (NFL). The Super Bowl LIV is the 54th edition of the game. The game will be played on Sunday, 2nd February 2020. The Kickoff time for the Championship has been set for 6:30 p.m. ET.

The Kansas City Chiefs will be playing against the San Francisco 49ers in the Super Bowl LIV happening next month. The Chiefs had won the AFC Championship game. They had defeated the Tennessee Titans by a score of 35-24 on Sunday at the Arrowhead Stadium in the city of Kansas in Missouri. On the other hand, The San Francisco 49ers had defeated the Green Bay Packers by a score of 37-20 in the NFC Championship game that took place at Levi's Stadium in Santa Clara, California.

The 49ers and the Chiefs will be competing for the Championship for the first time in the history of the Super Bowl game. The San Francisco's strongest point is its defence which had ranked first in the playoffs and second in the regular season. They were ranked first in the total pass defence as well. On the other hand, the Chiefs greatest strength is their offense.

The New England Patriots and the Pittsburgh Steelers are the only two teams that have won more Super Bowl Championships than any other team. But now it seems that the San Francisco 49ers could also join their company. The winner of the Super Bowl earns the Vince Lombardi Trophy. It is a 22-inch-tall trophy weighing seven pounds with a sterling silver football on a stand. Each member of the winning team will also win $118,000.

The weather forecasts for Miami Gardens shows that there can be rainy conditions the Super Bowl LIV day. Scattered thunderstorms and little evening showers can be seen for the showdown on Sunday.

The Super Bowl LIV will be broadcasted on the channels listed below:

Online Streaming: fuboTV (You can try this for free). The FuboTV can be live-streamed live on any kind of device including the Desktop, iOS, Android, Roku, Apple TV, Amazon Fire TV, Google Chromecast, Android TV and Samsung Smart TV and others.

The play-by-play announcer for the Super Bowl 2020 is Joe Buck and Color commentary will be done by Troy Aikman. There will be two sideline reporters including Erin Andrews and Chris Myers.