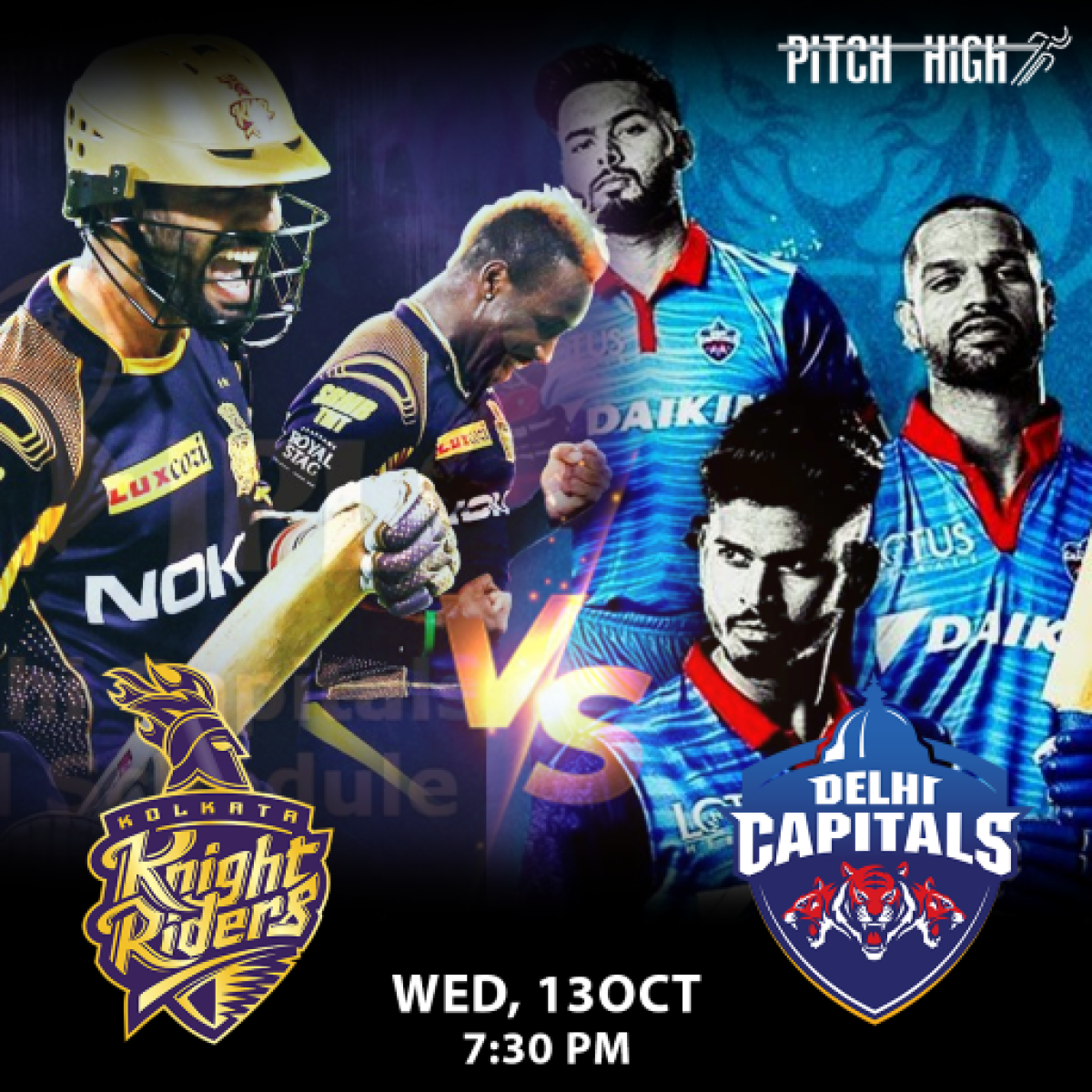 Delhi Capitals will face Kolkata Knight Riders in the second qualifier of the IPL 2021 on Wednesday. Delhi Capitals lost Qualifier 1 by a close fight against Chennai Super Kings for 4 wickets and now its time for them to seize another opportunity they are receiving since they finished at the top of the table. They were very competitive throughout Qualifier 1 and couldn't able to hold their nerves against one of the greatest finishers MS Dhoni. Will they reach the final for the second time in a row we need to wait and watch.

On the other hand, Kolkata Knight Riders stormed into second qualifier by defeating RCB in the Eliminator by 4 wickets in the final over of the match. Special thanks to Sunil Narine who picked up 4 wickets initially and later played a handy cameo with the bat. Their spinners are doing a commendable job in this tournament and hardly went for runs. Despite his poor run of form with the bat, Eoin Morgan led the team really well.

The ball is gripping and facing spinners will be a huge challenge for the batters on this surface. The wicket will slow down as the game progresses, even the score of 150 is a defendable score. Batting first is still a good option. 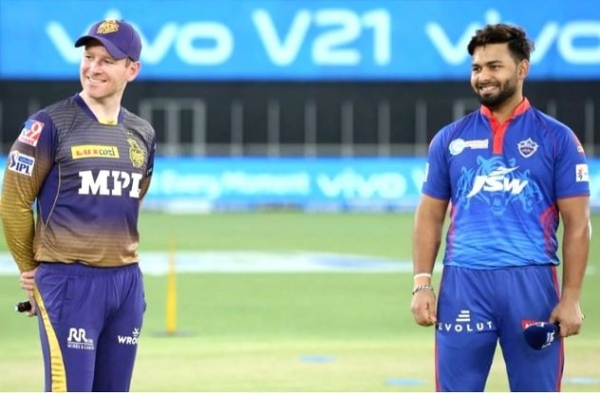 Prithvi Shaw played some delightful shots in the last match against Chennai Super Kings and bought up his 4th half-century in this IPL. Overall, in 14 matches, he has notched 461 runs at an average of 32.92 with the highest score of 82.

Shubman Gill looked good in the last game against RCB, he was undone by a slower one from Harshal Patel when he was on 29 runs. He is the 2nd leading run-scorer for Knight Riders in this edition with 381 runs in 15 matches.

The surface here at Sharjah will be ideal for Axar Patel as the ball is getting plenty of turn. He has scalped 15 wickets in 11 matches in this edition at an economy of 6.52 and even scored 36 runs with the bat.

Sunil Narine deserved the player of the match award for his impeccable all-round performances against RCB in the Eliminator. He picked up 4 crucial wickets at an economy of 5.25 and later played a quickfire 26 runs from 15 balls.

Anrich Nortje has been lethal with the ball and has troubled the batters in this IPL. In 7 matches so far, he has scalped 10 wickets at an impressive economy of 5.92.

Varun Chakravarthy has been pretty consistent throughout this IPL. He hardly bowls a bad delivery and is one of the most trusted bowlers by skipper Eoin Morgan. He anticipates the batter’s move well which makes him one of the successful bowlers in this format of the game.

Rishabh Pant is the first choice wicketkeeping option for your fantasy teams. His knock of 51* runs from 35 balls provided Delhi Capitals to put up a competitive score against CSK in Qualifier 1. Overall, in this edition, he has scored 413 runs at an average of 37.54. 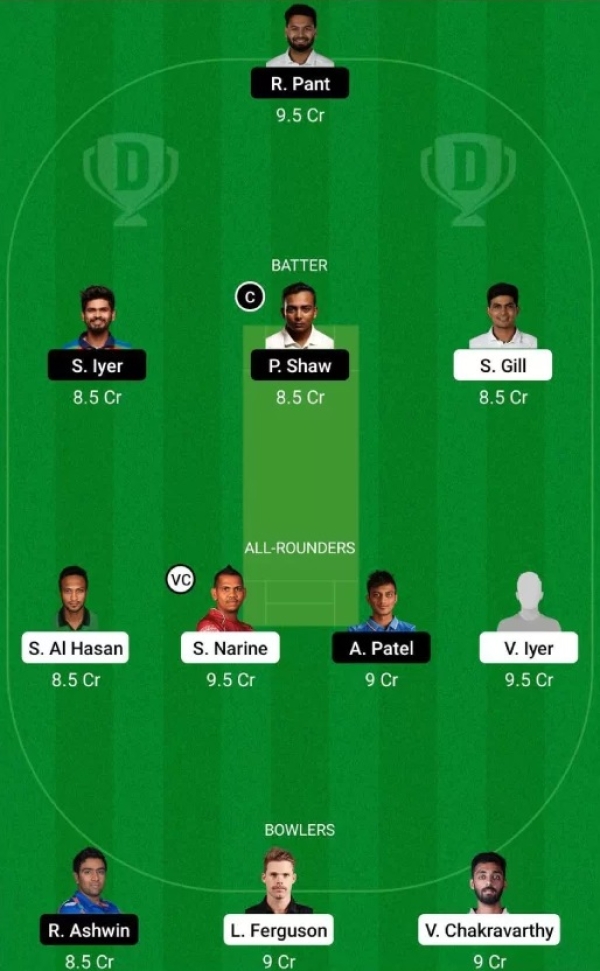 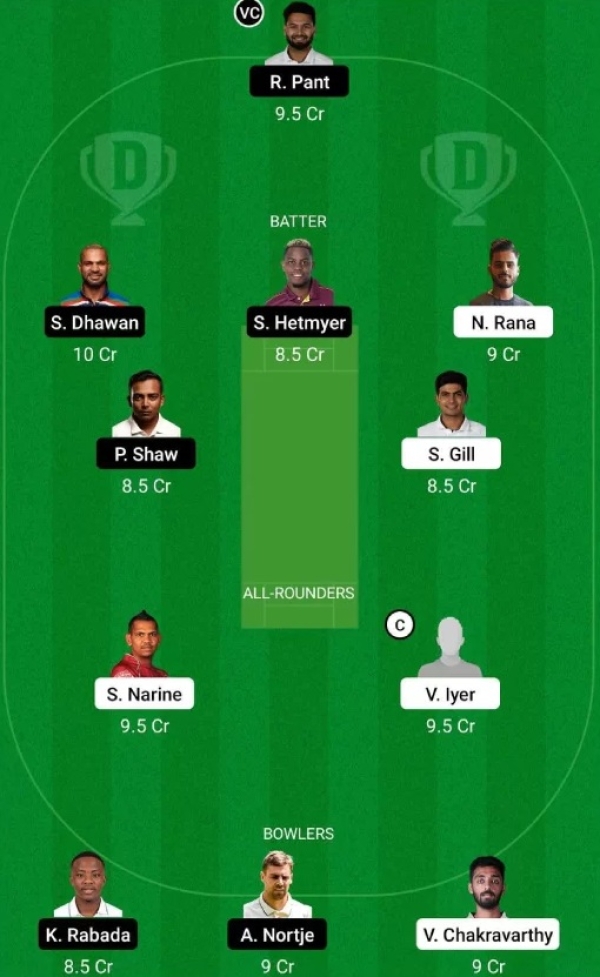 DC vs KKR Must Picks for Dream11 Fantasy Cricket:

Shikhar Dhawan hasn’t fired in the 2nd leg of the IPL to the expectations. Considering his current form, he is a risky captaincy pick for your fantasy teams.

Even on the spin-friendly conditions, Lockie Ferguson picked up 2 wickets against RCB in the Eliminator. You can take a risk and pick him as your fantasy team skipper.

Eoin Morgan has scored only 129 runs in 14 innings so far in this IPL at an average of 12.9. Hence, it’s better to avoid him while making your fantasy teams.