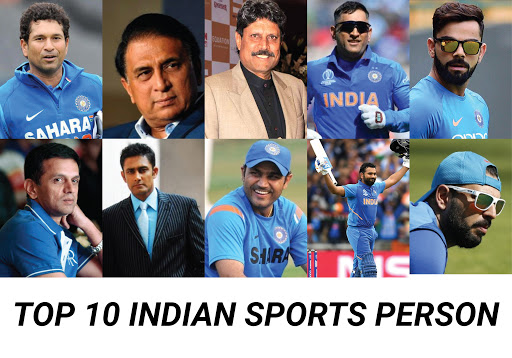 Given below is the list of top 10 famous cricketers. The list doesn't rank the players as every player has got his class. All of the players on the list are healthy and alive and some even part of our current team, which in turn makes the list even more interesting.

God of Cricket' is the title by which he is known and called not only in India but also in most other countries. He was born on 24th April 1973 in Bombay and made his debut in cricket at the age of 15.

After he retired in the year 2013, he was awarded Bharat Ratna which is Indias highestcivilian award. In international cricket, he is the only player to score over 30000. In a total of 664 international matches, he has scored a total of 34357 runs. Sachin also was the first player to pass 10000 rent in limited over cricket. In 2013 he had accumulated a record of 18000 ODI runs, giving him over 34000 words at international level.

Sunil Manohar Gavaskar was born in 1949 on 10th July in Bombay. During his leadership, India won tournaments like the Asia cup and Benson and lodges world cup.

The cricketer was awarded which the Arjun award and Padma Bushan in 1975 and 1980. He even wrote some popular books like Idols, Runs and Ruins, Sunny Days and One Day Wonder. He was the first player to 10000 runs in test matches and took 108 catches during his career. Gavaskar was awarded the Col Ck Nayvdu Lifetime Achievement Award for Cricket in India in 2012 and on 28th March 2014, he was appointed as the Indian BCCI president by the supreme court.

Kapil Dev was the captain of team India in the year 1983 when India won the World Cup. He has been given the title of Indian cricketer of the century by Wisdenin 2002. He has shown his excellent skills in test cricket with more than 434 wickets and 5000 runs. He was one of the finest all-rounders cricket fans have seen. He held the record for a quite long time for most number of Test and One-Day wickets. In 1986 he led India to a 2-0 series win against a strong England Side.

Mahendra Singh Dhoniwho is the former captain of the Indian Cricket Team, and is known as the greatest captain of all time. It was under his captaincy that India won the 2011 World Cup. He has the best test and One DayInternational cricket records. He took the captaincy in 2007 and led the team to first enter country ODI series and won in Sri Lanka and New Zealand. After resigning from India cements Ltd. He becomes the captain of Chennai Super Kingsin IPL. He has been awarded ICC ODI player of the year in 2008 and 2009, The Rajiv Gandhi Khel Ratna Award in 2007 and Padma Shri in 2009.

Virat Kohli is the current captain of the intel cricket team. He played his first test in 2011 August West Indies. He was born in September 1988 and is considered as the epitome of aggressive sportsmanship. He is known as the run machine and King Kohli in international cricket. He is the first Indian player who scored acentury on World Cup debut match. He was awarded ICC ODI player of the year in 2012 and 2017.He even won Arjuna Award in 2013 and Padma Shri award in 2017. He was conferred with the Rajiv Gandhi Khel Ratna Award in 2017.

Rahul Dravid was born on January 11 in 1973 in Indore. Due to his technical efficiency and stylish strokes, he soon became the pillar of Indian hitting order.In 1999 he was in brilliant form. In 2000 he was named 'Widen Cricket of the year' he also maintained a test career average of over 50. He then got promoted as the vice-captain. In 2003 world cup he was consistent and scored very well. He is the most dependable batsman of the Indian cricket team.

Anil Kumble is the second-highest wicket-taker of India and where's the main striker sincehis that debut in 1990. He was born on 17th October in 1970 in Bangalore. At the second test at Johnnesbury of 1992-93tour he took six wickets for runs and became Indias most indispensable bowler. His performances as best bowling figure of 6 wickets for 12 against West Indies fetched the Pepsi trophy for India. He has always shown fighting skills, even in 2002-2003 West Indies tour he came out on the field with abandage over his jaw and claimed the wicked of Brain Lara.

He was the backbone of his team with his hard-hitting batsmanship with an excellent strike rate. He was born on 20 October 1978 in Delhi. He did not make it to the 1999 world cup due to his disastrous debut against Pakistanat Mohali. but he made a strong comeback in the team during the 2001-2002 Australian tour. He entered the test arena with a ton in the first test at South Africa but during the ICC World Cup 2003, he couldnt do much except a bit in the finals.

He was born on April 30, 1987, in Maharashtra. He is the captain of IPL team Mumbai Indians and also the vice-captain of the Indian cricket team. He is the only two score 250 + in ODI innings. In2013 he made his permanent place in the team and took India to win the champions trophy in 2013. He has scored 2 test centuries, 5 ODI centuries and 26 20-20 centuries. He has won four champion League as captain of Mumbai Indians.

He was born on 12th December 1981 in Chandigarh. He had played for Punjab in the Ranji Trophy. At the ICC knock out tournament he scored 84 runs against 80 balls but after this, he suffered from a bad form and was eventually dropped from the team in early 2001. During the 2003 world cup, he was in great form. At the TVS Cup 2003, he scored his maiden century against Bangladesh. In 2019 he retired from cricket.

Given below is the list of top 10 famous in 10 cricketers. The list doesn't rank the players as every player has got his class. All of the players on the list are healthy and alive and some even part of our current team, which in turn makes the list even more interesting.