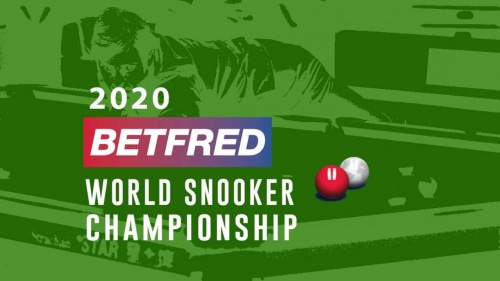 The World Snooker Championship is a snooker tournament that has always been leading both in prestige and the prize money. The first championship took place in the year 1927 and the winner was Joe Davis. He had won the first 15 championships after which he retired from the event.

Currently, the tournament is being played over a period of 17 days and it ends on the first Monday that comes in the month of May. The best record is held by Stephen Hendry who has won the title seven times. Steve Davis and Ray Reardon both have won the title six times while Ronnie O'Sullivan has won the title five times. The current champion of the World Snooker Championship is Judd Trump, who won in 2019. It is the first time he had won the championship.

This is going to be the 44th consecutive year that the World Snooker Championship will take place at the Crucible and it will also be the 17th as well as the final ranking event of the 2019/2020 season. The Qualifying for the Snooker tournament will be beginning from 8th April 2020 to 15th April 2020 at the English Institute of Sport located in Sheffield, England.

The Englishman Judd Trump is going to be the defending champion, as he has won last year's event after he defeated Scot John Higgins by a score of 18–9 in the finals. This was his first world championship. Before this,  he had reached the finals just once in the year 2011. This year, he will make an attempt to avoid the "Crucible curse".

The world Snooker championship will have 32 professional players who will be competing in one-on-one snooker matches in the format of a single-elimination, with each being played over several frames. The 32 players for this event have been selected by the mix of the world snooker rankings and a pre-tournament qualification round. The first world Snooker championship was held in the year 1927 in Camkin's Hall, Birmingham, England. Joe Davis had won it. Since the year 1977, the championship has been held in Crucible Theatre in Sheffield, England.

The most successful player of the Tournament during the modern era is Stephen Hendry. He had earned a total of seven titles. The champion of the 2020 championship will be winning prize money of £500,000, from the total prize money of £2,395,000.

In the month of May 2019, World Snooker chairman, Mr Barry Hearn had made an announcement about the qualifying format of the event that will be changed from the last year. The seeding will be given to the players who get a higher ranking, and this will be played over four rounds instead of three. The main draw of the Snooker Championship will be played at the Crucible Theatre in Sheffield.

The top 16 players that will get the latest world rankings perhaps will be automatically qualified for the main draw as the seeded players. Hence, The Defending champion, Judd Trump will be automatically seeded as the first. The remaining of the fifteen seeds will be allocated based on the latest world rankings, that are released after the 2020 Tour Championship, which is also the penultimate event of the season. The Matches that are held in the first round of the main draw will be played as the best of the 19 frames.

The prize fund for the 2020 World Snooker Championship

The breakdown of the prize money for this year's Snooker Championship is given below: