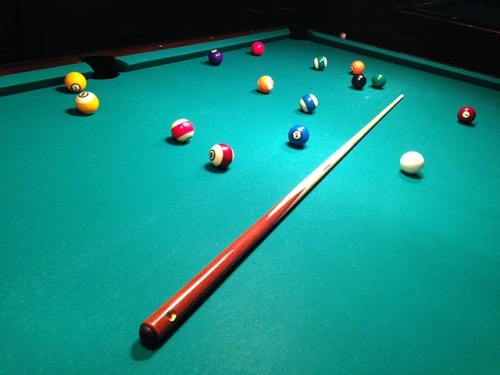 Billiards or cue sports are a wide variety of games of skills which is popular not just in England but around the World. The game is generally played by two or more players with a stick which is used to strike billiard balls which makes them move around a cloth-covered billiard table which remains bounded by elastic bumpers known as cushions.

The familiar name of the game is still employed by some as a generic label for all such games. In British and Australia English, billiards refer to the game of English billiards while in countries of American and Canadian English it refers to a particular game or class of games, or to all cue games in general which depend upon dialect and context. The term billiards in colloquial usage is used to refer to pocket billiards games, such as pool, snooker or Russian pyramid.

The sports have other variants too that make use of obstacles and targets and table-top games played with disks instead of balls.

Since 1893 the games with regulated International professional competitions, have been referred to as ‘sports' or ‘sporting events’ but not simply ‘game’.  There are a variety of particular games with a set of rules and equipment, including many of those already mentioned with the competition especially being broad in nine-ball, snooker, eight-ball, and three-cushion.

Snooker, which technically is a variant of pocket billiards is a professional sport which is organized at the international level, and the rule of the game bear little resemblance to those of Pyramid, modern pool, and other such games of billiards.


In 2005 world games featured “Billiards” category encompassing pool, snooker and carom which was held in Duisburg, Germany. In 2006 Asian games also had a cue sports category.

There are mainly two varieties of period games namely: carom and pocket billiard.The main carom billiard games are straight rail, backline and especially three-cushion billiards. All the games are played on a particular pocketless table with three balls, two cue balls and one object ball. In the games of billiards players shoot a cue ball so that it makes contact with the opponent's cue ball as well as the object ball. Four-ball and five-pines are the other of multinational interest.

The most popular games globally in pocket games are pool and snooker.

These games are variations and are played using small disks instead of balls and light-weight cue sticks.

These games have been developed from cue sports and are played with the hands directly.

*Boccette (an adaption of Five-Pin Billiards)

Given below are the facts about the games of Billiards

Score of 2/3 points is achieved by the player when his cue ball hits one or more balls and then goes down a pocket.

A score of 2/3 points is what the player gets when any bol other than his cue ball goes into a pocket.

A score of 2 points is gained when the cue ball hit both the other balls.