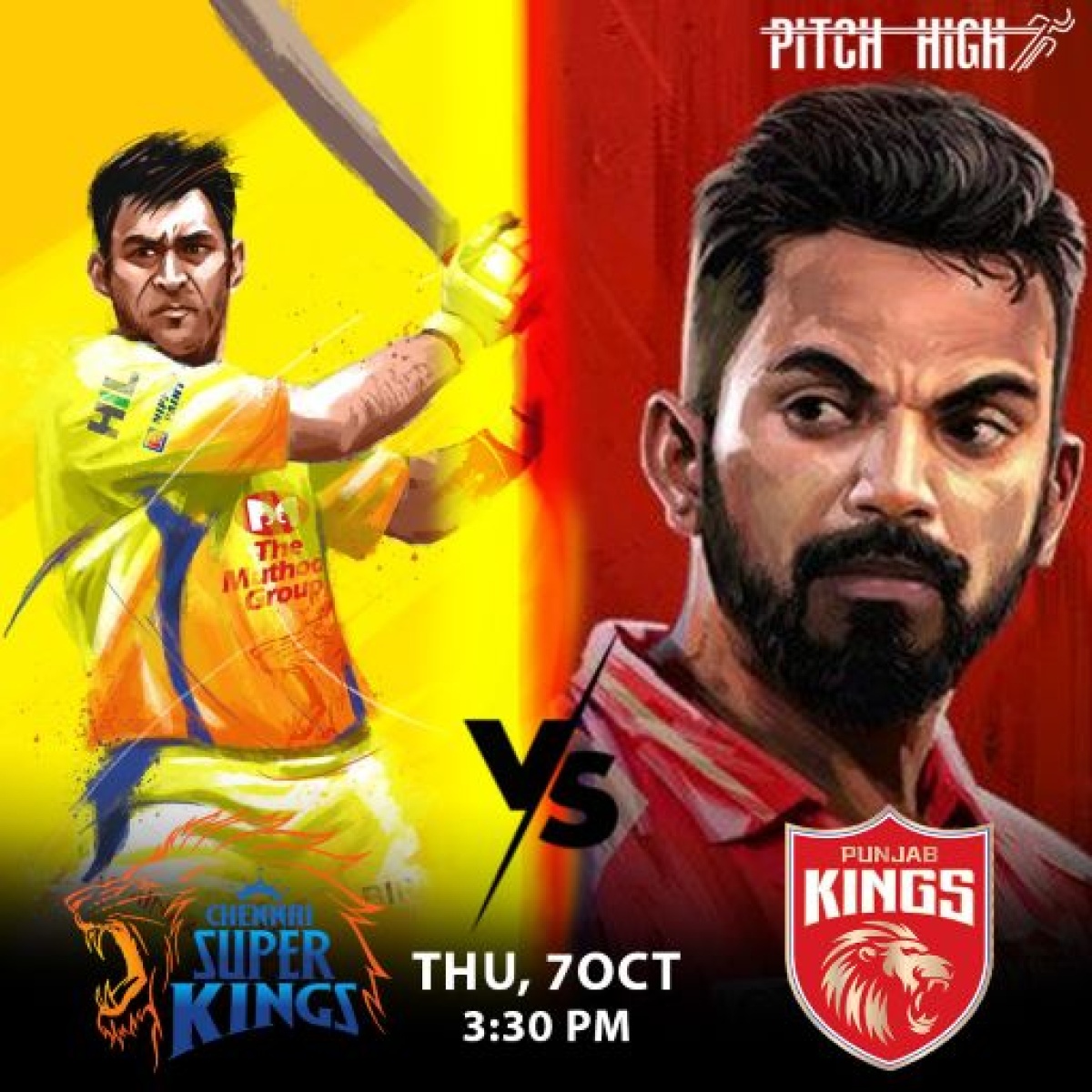 In the battle between kings, Chennai will face the Punjab in the 53rd match of the IPL 2021. It is a crucial match for both sides. Chennai will aim to finish in the top 2 spots, while on the other hand, Punjab must win this match to stay in the qualifying race. Chennai Super Kings are in a troubled position right now, since they lost their last two games to the Delhi Capitals and the Rajasthan Royals. Currently, they are in second place in the standings with 18 points.

Punjab relies mainly on their top order batters and the lack of mid-order players has been one of its main concerns during this tournament. At one point they were cruising well against RCB, but ended up on the losing side by 6 runs. They need to have a close look at the results of KKR, MI, and RR for their qualification scenarios. Currently, they are in the 6th spot in the standings with 10 points.

The batters have struggled a lot to score runs in the last game between Chennai Super Kings and Delhi Capitals. The wicket is more on the slower side when the score of 160 is defendable on this wicket. 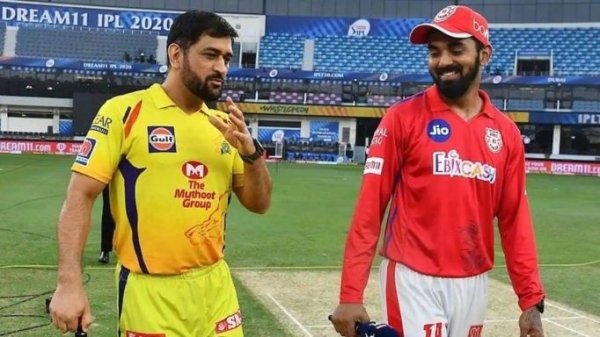 Ruturaj Gaikwad is stealing the show with the bat for Chennai Super Kings. Currently, he is second in the list of leading run-scorers in this tournament, having scored 521 runs in 13 matches, including one century and 3 half-centuries.

Mayank Agarwal is a bit under the shadow of Lokesh Rahul, but has done well in the second leg of the IPL, scoring 2 half-centuries in his last 4 matches.

Ravindra Jadeja is one of the premier all-rounders in the Chennai lineup. He has done a remarkable job with his all-round performances in this IPL. In 13 matches, Jadeja has scalped 10 wickets at an economy of 6.75 and has also scored 212 runs at an average of 70.66.

Playing in his first game in the second leg of the IPL, Moises Henriques proved his worth by picking 3 wickets against RCB, and he also scored 12* runs with the bat.

'Lord’ Shardul Thakur is well known for giving breakthroughs whenever needed for his side. He is the leading wicket-taker for Chennai in this edition of the IPL, with 15 scalps in 13 matches at an economy of 8.52.

Mohammed Shami has been phenomenal in the second leg of IPL. In the last 5 matches, he has already picked up 10 wickets, with the best figures of 3 for 21.

Lokesh Rahul likes to take the game deep, though it has backfired for his side on some occasions. He has been a consistent performer over the last 4 years and has scored heaps of runs. In 12 matches in this edition, he has scored 528 runs at an average of 52.8 and a strike rate of 129.09. 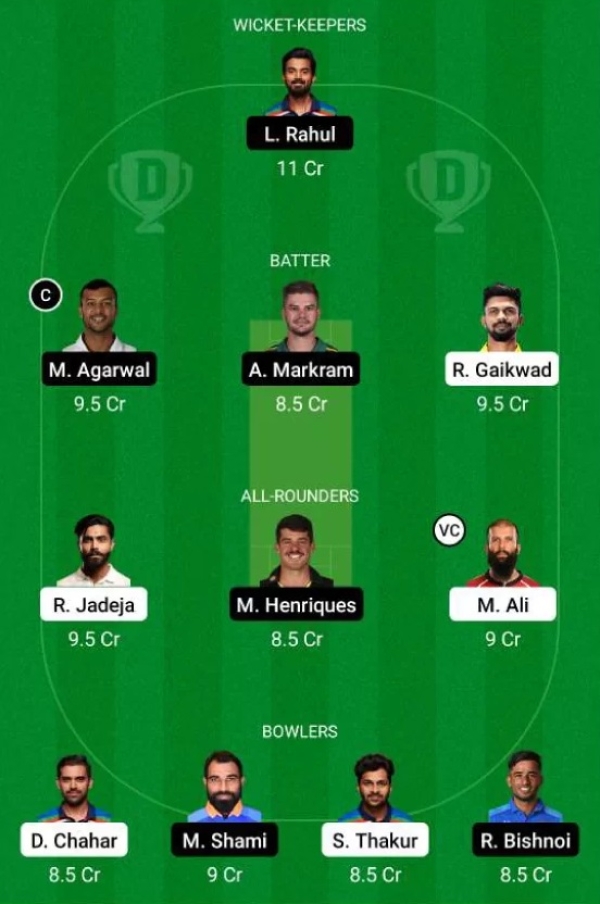 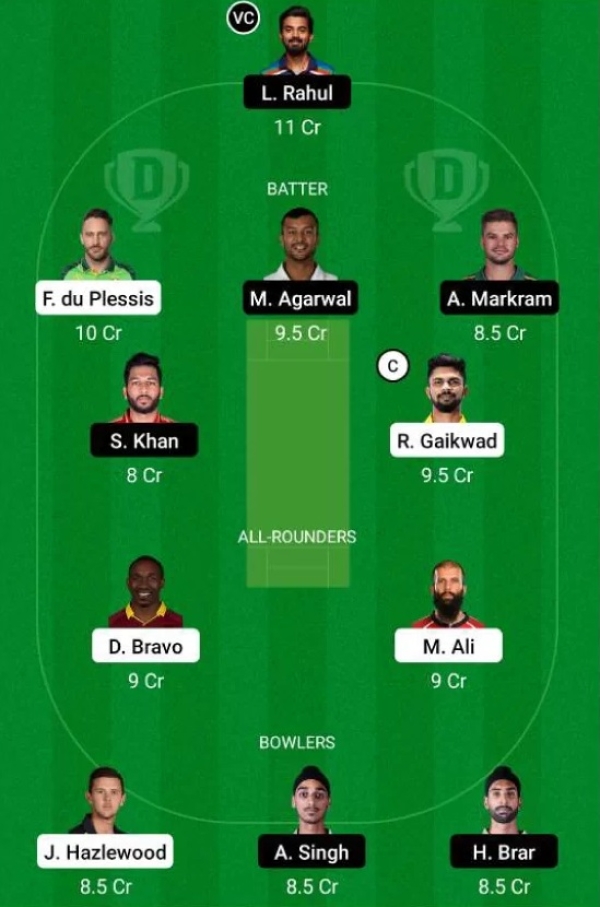 CSK vs PBKS Must Picks for Dream11 Fantasy Cricket:

Faf du Plessis is fifth in the list of leading run-scorers in this tournament, with 470 runs in 13 matches. It’s worth a risk and you can pick him as your fantasy team skipper.

Shahrukh Khan is a genuine finisher for Punjab Kings. He has scored 16 and 22* in his last 2 matches. You can take a risk and pick him as your fantasy team captain.

MS Dhoni struggled a lot to score runs in this tournament. Considering his current form, it’s better to avoid him while making your fantasy teams.